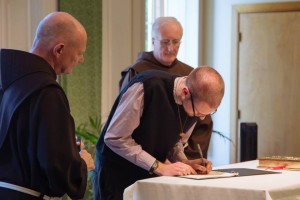 A friar who recently completed his postulancy in Killarney has become the first Irish novice to go to America to join the international novitiate of the Franciscans.

Denis Aherne is one of 14 men from the US, Canada and Ireland who have begun the 2014-2015 year at the Interprovincial Novitiate in Burlington, Wisconsin, USA.

“We are glad to have the opportunity to send him,” Fr Joe MacMahon, Secretary of the Irish Province told CatholicIreland.net.

“It is a good peer group. There is a much wider dimension to it with people from all over.”

He explained that those from the English-speaking nations such as the US, Australia, Canada and several others have united their novitiates in this one site in a remote part of Wisconsin.

During their year-long postulancy, candidates will be given an intense experience of Franciscan life.

They will focus on their ongoing spiritual formation, with a great emphasis placed on prayer and on the contemplative dimension of their Franciscan vocation.

They will live, pray, and eat with the Franciscan community to become familiar with fraternal living.

As Denis Aherne was the only novice, the Irish Franciscans looked elsewhere for his novitiate. They have co-operated with Franciscans in the UK in the past, but this is the first time they have sent someone to the novitiate in America.

The co-operation with the UK continues and two men from there will do their postulancy in Killarney.

When Denis Aherne concludes his year in Wisconsin he will come back to Ireland only to set off again to do a ‘Franciscan Year’ in Canterbury.

Formation for the Franciscans in Ireland has moved from Dublin to Athlone which is within easy reach of Maynooth for theological studies.

The changes, both in Ireland and abroad, are in part due to a fall in vocations in Europe and North America. But in the southern hemisphere vocations are more plentiful, for example 12 postulants recently entered the seminary in Zimbabwe.

In Ireland, the Franciscans had an ordination in May and will have three professions in September of two men from Ireland and one from England. Two more men are studying in Maynooth for the next few years.

“With us here in Ireland we have had a trickle (of vocations) over the years,” Fr MacMahon said.

“The calibre of men that we are getting is very good, we are happy with that. Usually they are older now with more in their 30s and 40s.”

The various Franciscan provinces are collaborating more and more these days, not just for formation.

“At all levels we want to be international,” said Fr MacMahon. He explained that if they were to open a mission or project in the past one province would have taken full responsibility for it but now volunteers from several provinces get involved.