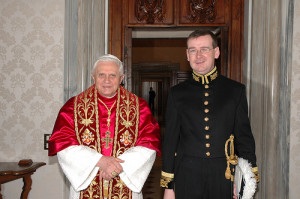 Francis Campbell, the former British Ambassador to the Holy See, has been appointed principal of St Mary’s University College, Strawberry Hill in London.

The diplomat was the first Catholic since the Reformation to serve as a British ambassador to the Holy See, a role he fulfilled between 2005 and 2011.

The 43-year-old is due to take up his new role in Twickenham after Christmas.

It started out as a teacher training college but, according to The Tablet, it is now on the verge of gaining full university status.

Born in Newry, Co Down, Mr Campbell received a BA in Political Science and Scholastic Philosophy from Queen’s University, Belfast and underwent further postgraduate studies at the Catholic University of Leuven, Belgium, and the University of Pennsylvania, USA.

He joined the Foreign Office in 1997.

His early career focused on Europe with postings to the European Enlargement Unit of the Foreign and Commonwealth Office and secondment to the European Commission, as part of its Delegation to the United Nations in New York.

From 1999-2003 he worked at 10 Downing Street. He was appointed first as a policy adviser, and then as a private secretary to the then Prime Minister, Tony Blair.

His most recent foreign posting was as British Deputy High Commissioner in Karachi, Pakistan.

One of the highlights of his diplomatic career was when he accompanied Pope Benedict on his UK visit in 2010 – during which there were two huge events on the St Mary’s campus – the meeting with Religious and the gathering of school children.

In February and March 2010, a hree-part documentary by BBC Northern Ireland called ‘Our Man In The Vatican’, focused on a year in the life of Francis Campbell in his capacity as Ambassador to teh Holy See.

Contributors to the programme included Tony Blair, the Prime Minister during his role as private secretary at No 10 Downing Street.