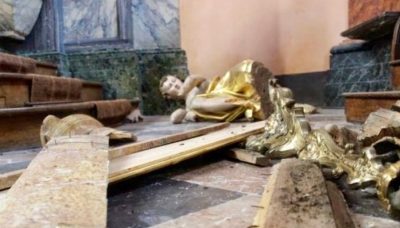 A statue smashed by vandals in an attack on a church in Paris (Photo: Cardinal Robert Sarah via Twitter)

More than two dozen church buildings across France have been hit by serious vandalism, including arson and desecration, this year.

The most notable attack occurred on 17th March, when Saint Sulpice, the second biggest church in Paris, was set on fire shortly after midday Mass in an incident that police are describing as arson.  The damage is estimated at hundreds of millions of euros – and it could have been much worse but for the prompt response by firefighters.

In the week before that attack, there were eleven other serious attacks on church buildings.  Police are so far at a loss as to whether the attacks are being coordinated or what the motivation behind them might be.

During February and March, other attacks on churches included the defilement of the Church of Notre Dames des Enfants in Nimes, where the building was smeared with human excrement, the main altar and tabernacle were looted and consecrated hosts were stolen and dumped.

The Bishop of Nimes, Robert Wattebled, decided the desecration was so severe that the activities at the church had to be stopped until penitential rites of purification had been carried out.

Hundreds of kilometres away in Dijon, the high altar at the Church of Notre Dame was attacked, its tabernacle was looted and consecrated hosts were trod into the ground.

In Lavaur, near Toulouse, statues and crosses in the Cathedral of Saint Alain were toppled and smashed and an altar cloth set on fire.

In the wider Paris area, more than a dozen Catholic church have suffered attacks of varying severity. In Houilles, a nineteenth century statue of Our Lady was irreparably damaged in one of three attacks on the same church within the space of ten days.

Posting pictures of some of the attacks on Twitter, the Prefect of the Congregation of Divine Worship, Cardinal Robert Sarah, commented: “The acts of desecration and vandalism in churches are always highly reprehensible. They are the sad reflection of a sick civilisation that gets carried away in the nets of evil. Bishops, priests, the faithful must keep strength and courage.”

While the French Bishops’ Conference (the CEF) hasn’t commented on the attacks as yet, there has been speculation in the French media that attacks on Catholic church buildings may have increased because the CEF issued a statement at the start of February condemning attacks on Jewish synagogues.

However, it appears that for some time the Catholic Church has been the main religion targeted by vandals but, until the St Patrick’s Day attack on Saint Suplice, these attacks were given little prominence in the media.

According to the French Ministry of the Interior, last year there were 541 attacks on property that could be described as anti-Semitic acts, 100 that could be categorised as anti-Muslim and a total of 1,063 that were anti-Christian.