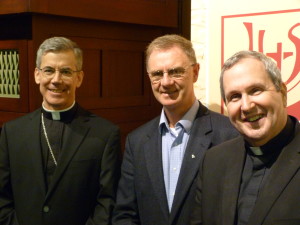 “There are very good reasons to believe,” the eminent Jesuit physicist, Fr Robert Spitzer, has said and some of these reasons come from physics and some come from philosophy.

He made his comments in an address at a conference at University College Dublin on ‘Reason, Science and Faith’ in which he discussed the evidence for creation and the possibility of supernatural design in contemporary physics.

“I think theists have nothing to fear, in fact I think they have everything to gain as we allow the evidence to unveil itself both in physics and philosophy,” he said.

The President of the Magis Centre for Faith and Reason recommended that those who have an interest in physics look at the 2003 Borde-Vilenkin-Guth Theorem (the BVG Theorem) as well as the 1994 Borde-Vilenkin Proof and the modelling of inflationary universes by Alan Guth.

Borde-Vilenkin-Guth have space-time geometry proofs for the beginning not only of our universe but even of a hypothetical multiverse and so we can actually come very close to getting to a beginning of physical reality he said.

Elsewhere in his address, Fr Spitzer appealed to Catholics not to try to make the Bible into a scientific document.

Referring to Pope Pius XII’s 1943 encyclical Divino Afflante Spiritu in which the Pontiff said ‘let science be science and let the bible be the bible’, the Jesuit highlighted that Pius XII “didn’t try to force the Bible to be a scientific document.”

“Pope Pius XII was right on the marker and he gave Catholics a great deal of freedom to be both scientists and biblical believers,” Fr Spitzer told CatholicIreland.net.

He appealed to younger Catholics who were drawn to a creationist view of the origins of the universe not to accede to such theories. Belief that the earth is 6,000 years old would bring the Church’s credibility “down to zero”, he warned.

The writer, who has been a regular contributor to EWTN and debated proofs for the existence of God with Stephen Hawking on the Larry King Show in the US, added, “We as Catholics don’t believe in what is called the dictation theory of inspiration. Some Christians do but that is not our view. We don’t want to extract science out of the bible that wasn’t the intention of God in the first place.”

The Papal Nuncio to Ireland, Archbishop Charles Brown, was the principle celebrant at a Mass to conclude the first day of the conference in UCD.

In his homily, the Nuncio noted that those attending the Mass had been studying about creation and cosmology. “There is an interesting connection between the creation of the world – cosmology – and the event that is indicated in the Gospel today – the incarnation.”

He said that connection was noted by Cardinal Joseph Ratzinger in his book the ‘Spirit of Liturgy’ where he highlighted how the Fathers of the Church saw a correlation between the cosmological creation and the moment of the annunciation. It was the faith of Mary which allowed the incarnation to take place he said.

“You are studying the theories of cosmology and creation which is incredibly important because it helps nourish your mind,” he told the conference delegates. “The mind helps the heart and the heart through prayer helps the mind to enter into these truths. You see that correlation of heart and mind in Mary – that is why she is such an icon of faith,” he said.

Fr Robert Spitzer is a past president of Gonzaga University in the US. During his tenure (1998 to 2009) he significantly increased the programmes and curricula in faith, ethics, service. He also spearhead the building of 20 new facilities and increased the student population by 75 percent.