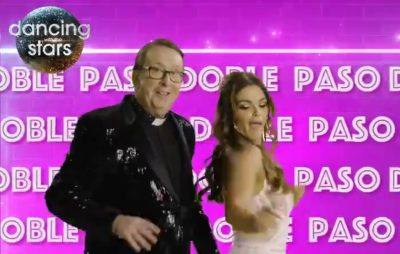 Dancing with the Stars programme to score only one point from one of the show’s judges.

After last week’s performance with professional dancer Kylee Vincent, the judges were not impressed by the 65-year-old priest’s attempts, with judge Brian Redmond giving him only one point. This is the lowest score given by a judge to a competitor in the three-year history of the hit dance show.

The points garnered by Fr Ray from the other two judges, Lorraine Barry and Julian Benson, were not much better: with Fr Ray getting only two points and three points from each respectively. Nevertheless, the Westmeath-born cleric is resilient. He told Midlands 103 radio: “It’s entertainment. A lot of people booed when Brian only gave me one point. It’s entertainment: if everything ran smoothly it wouldn’t be.”

Fr Ray first found fame in 2014 when his singing of a version of Leonard Cohen’s Hallelujah! at a wedding became a viral hit on YouTube. He went on to record two albums and appeared as a contestant in ITV’s Britain’s Got Talent two years ago.

Looking at the nine couples who are still in the contest, Fr Ray needs to do better than the current ‘next worst’ competitor, boxer Michael Carruth, if he hopes to stay in the game show, which is one of RTE’s biggest rating hits.

In tonight’s show, the competitors are dancing their hearts out to some of movieland’s most memorable film scores. As a result, Fr Ray will become ‘Ireland’s Paso Doble Pastor’, when he and Kylee dance to the theme of The Magnificent Seven.

Will the parish priest of Oldcastle, Co. Meath, continue tripping the light fantastic on Sunday nights, or will he be caught wrong-footed and eliminated? Watch tonight’s episode of DWTS on RTE1 at 6.30pm to find out.