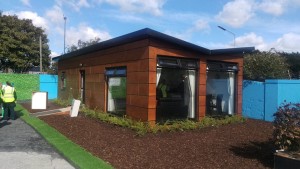 Fr Peter McVerry has welcomed the prefab homes intended for the homeless but only as a temporary solution.

The Jesuit campaigner on homelessness viewed the demonstration homes in Dublin yesterday (Tues 15 September) and said he wouldn’t mind moving into one himself.

“I fully support the use of modular housing as a temporary solution to homelessness. I have seen today high quality, well designed, well finished units that will make good homes.”

Fr McVerry added that the houses would be “paradise” for any family who is staying in B&Bs and hotels as so many homeless families do at the moment.

However, he pointed out the these homes, as seen in the Modular Housing Demonstration Project organised on behalf of the Dublin local authorities, will not be available until next summer unless some emergency legislation is introduced.

Speaking from the test site in East Wall, Pat Doyle, CEO of the Peter McVerry Trust said what it wants to see happen, and what needs to happen, is for “modular housing to start coming on stream before Christmas”.

He added, “Our concern is that without the power to fast track through the planning and procurement procedures we won’t see any modular housing until summer 2016 at the earliest.”

Pat Doyle said that in order for that to happen the Government needed to declare an emergency in housing and homelessness.

“We have a homeless and housing crisis, in a few weeks’ time as winter begins we will be in an outright emergency as the numbers continue to rise. If the Government was willing to show leadership and declare an emergency, Local Authorities would have the power to fast track the development of housing units on 20 sites which have already been identified in Dublin.”

Pat Doyle concluded, “We will support every effort made by the Department of the Environment and the Local Authorities to get modular housing on site and to get homeless people into their own homes. Peter McVerry Trust is willing to play whatever role it can to help bring these units to fruition.” 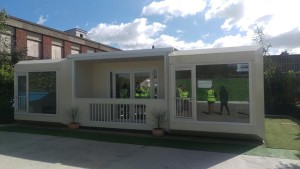 Once permissions are granted and the onsite work is done, a 20 unit development could be completed in 6 to 8 weeks.

Focus Ireland said on Drivetime that there are a lot of details to be finalised – for example will the houses be placed on a site with suitable infrastructure such as shops, access to transport, and schools?

Focus Ireland also stated that it would be vital that authorities continue with plans already in place such as building proper social housing and tackling high rents and evictions which make people homeless in the first place. 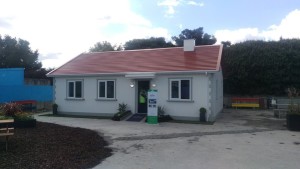 If they meet with approval, the Dublin Regional Housing Executive (DRHE), which is showcasing the units, will then have to bring a proposal to Central Government for planning and a procurement of the actual units.

The Dublin local authorities have been identifying potential sites and final selection will be addressed in conjunction with central government.

The DRHE stated that up to the end of August there were 607 families (with 1,275 child dependents) in all forms of emergency accommodation.

Of these, 203 families with 425 children were in emergency accommodation and 404 families with 850 child dependents in commercial hotels.

The building of modular units could go on in tandem with building more permanent accommodation.

One suggestion is that the modular units be used for around 5 years for the homeless before being moved for use elsewhere.