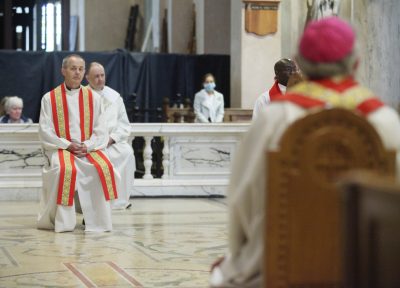 Pope Francis has appointed Fr Martin Hayes, a priest of the Archdiocese of Cashel and Emly, as the new Bishop of Kilmore.

The announcement was made on the first day that the country’s churches reopened for public worship.

The Papal Nuncio, Archbishop Jude Okolo, revealed the news following the celebration of 10am Mass in the Cathedral of St Patrick and St Felim in Cavan town.

Prior to the Pope’s announcement, Fr Hayes had been working as director for pastoral planning and development in the Archdiocese of Cashel and Emly, a role he was appointed to in August 2017.

He co-ordinated a diocesan-wide ‘Listening Process’ in Cashel & Emly’s 46 parishes and was also involved in a ‘Listening to Priests’ process commissioned by the Archdiocese.

In his address in Cavan on Monday morning, Bishop-elect Hayes said, “The Church of the future is about the increased involvement of lay people; of people and priests working together. My brief, initially, will be to listen, learn and draw upon my recent experience of pastoral planning.”

He paid tribute to the time invested in pastoral planning in Kilmore and “the efforts to respond in changing times with a mission that can be effective and relevant”. 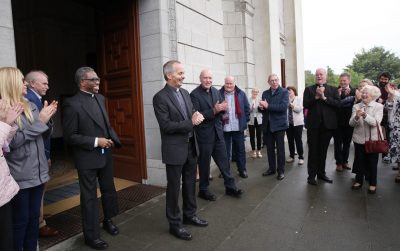 Referring to the Covid-19 pandemic, Bishop-elect Hayes observed, “We are living in strange times as we continue to cope with Covid-19. This is a good day as we begin to gather for the celebration of Mass in our parish churches.”

But he also remembered and offered his sympathies to the relatives of those who had died recently, including those who suffered with the coronavirus and in particular, those of Kilmore diocese.

Fr Hayes also acknowledged the service of all the healthcare and all frontline workers who continue to be involved in responding to the pandemic.

Recalling important influences and moments in his faith journey, he highlighted the role of his home parish and the faith of his parents.

His faith journey deepened while he was attending college in Limerick when he encountered the youth faith movement Muintearas Íosa and some inspiring priests.

Responding to the Pope’s announcement, Archbishop Eamon Martin said Fr Hayes’ considerable pastoral experience and interest in youth, vocation, marriage and family issues would be of great benefit not only in Kilmore, but it would also bring fresh ideas and insights to discussions at the Bishops’ Conference. 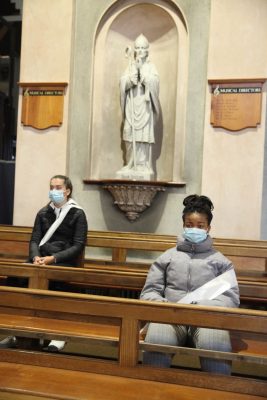 Members of the congregation who attended mass in St Patrick and St Felim Cathedral, Cavan where Fr Martin Hayes was announced as the new Bishop of Kilmore. Pic John Mc Elroy.

Monsignor Liam Kelly, Administrator of Kilmore said in a statement, “We are delighted that a priest of Fr Martin’s calibre with such extensive experience in parish ministry and pastoral planning in his native Archdiocese of Cashel and Emily is coming to Kilmore as our new bishop.”

Archbishop Kieran O’Reilly recalled how Fr Hayes had taken over the challenging position of Diocesan Director for Pastoral Planning and Development and had worked at it with great dedication and skill.

“On a personal level, Fr Martin has been a tremendous support to me since my appointment to the Archdiocese in November 2014. He has been of great assistance when he served as the Administrator of the Cathedral of the Assumption in Thurles and subsequently as Director for Pastoral Planning and Development.”

Since his ordination as a priest in 1989, he has served the Archdiocese of Cashel and Emly as a member of the staff of St Patrick’s College, Thurles and as Administrator of the Cathedral of the Assumption, for fifteen years.