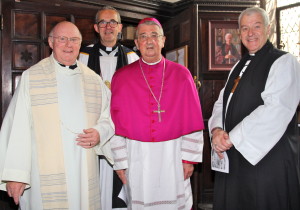 Old Portoran and Jesuit, Fr John Sullivan, was an “extraordinary man” who touched the lives of “countless people across a wide spectrum of society and he did so without pretension”, the Church of Ireland Archbishop of Dublin and Glendalough said on Sunday.

At a service to honour the life of Fr John Sullivan SJ, whom Pope Francis elevated to Venerable last November, Archbishop Michael Jackson recalled in Christ Church Cathedral that Fr Sullivan spent half of his life as an Anglican and a layperson and half as a Roman Catholic and a Jesuit priest.

“Anglican and Roman Catholic; lay and ordained: these for long have played their part as interlocking and interacting identities in Irish life and frequently have been seen as incompatibles and contradictions.”

He added, “We can throw into this equation the fact that he was educated in Portora Royal School, Enniskillen, a school which is now in today’s Northern Ireland.”

Dr Jackson described Venerable Sullivan (1861-1933) as a person who “moved from sophistication to simplicity when the majority of people seem to crave moving in the opposite direction”.

“As he developed in the expression of his discipleship and in his priestly work, his patent eccentricity in so many respects made him more rather than less loved.”

The Church of Ireland Primate of Ireland asked: “Are we capable of such toleration and affection today, of letting humanity shine through the light of divinity, when church life truly is in need of massive structural overhauling and when the cult of second-hand celebrity has taken hold of so much personal identity?”

He further challenged, “There is something deep within us that knows that managerialism has wreaked havoc on the dynamic of faith and of possibility and potentiality in the church, as also has neo-orthodoxy.” 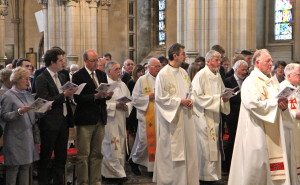 He said we are alarmed by it, yet we seem to lie down before it.

“John Sullivan was much more of a free spirit; he lived the life of a saintly person at the heart of a pulsating, independent academic and intellectual community in Clongowes (and before that in Portora) and still he bridged the gap with countless faithful people for whom the Community Church was in fact their parish church in Co Kildare. He saw no contradiction between independence and faithfulness and, clearly, neither did God.”

The service was attended by members of the Gardiner Street parish and community; members of the Jesuit Order, including the provincial Fr Tom Leyden SJ; students from Clongowes Wood, where Fr Sullivan lived most of his Jesuit life, and students of Portora Royal School, where the future Jesuit priest was educated.

The service was organised by Archbishop Jackson, with the assistance of Dean Dermot Dunne of Christ Church Cathedral and Fr Conor Harper SJ. Archbishop Diarmuid Martin spoke at the opening of the service.

In his address, Archbishop Martin said the holiness of Fr Sullivan grew and developed and deepened as his life progressed. Discussing the universal call to holiness, he said “holiness knows no denominational boundaries”.

The Archbishop highlighted that Fr Sullivan’s faith was “the product of two traditions and always remained so and was enriched by that fact”.

“In our ecumenical reflection and activity we pay too little attention to the example of saints on all sides as a bridge to what is common in our traditions.”

“Ecumenism isn’t just the possession of theologians and activists – there is an important ecumenical transformation that comes from personal encounter with the authentic Christian witness of Christians of other traditions”, he commented. 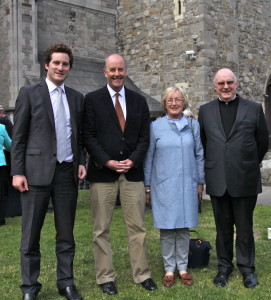 Referring to Fr Sullivan’s “remarkable effect on young people as a spiritual director and teacher”, he said he struck young people through the authenticity of his life as a person, priest and man close to God.

“In our times we worry so often that the Churches have difficulties in reaching young people and helping them to be fascinated by the person and message of Jesus Christ.”

In his sermon, Archbishop Jackson recalled that John Sullivan was baptised in the Church of Ireland Parish Church of St George in Dublin’s Hardwick Street.

He was educated at Portora and the Archbishop paid tribute to the “imaginative twinning” of Clongowes and Portora through the annual Joyce-Beckett Literary Award.

“At the height of a politically divided Ireland, this was a shining light of witness to tolerance, to inclusion, to creativity and to respect for difference,” he said.

These exchanges between the two schools involved the repeated and consistent presence of boys and teachers from Clongowes in Enniskillen on Remembrance Sunday laying a wreath at the Cenotaph, he noted.

“This vignette of courage, year after year, became an icon of hope in a town where nobody has yet really admitted responsibility for the human tragedy and the travesty of the Enniskillen Bomb,” he said.

He added that Fr Sullivan “throws into the air in our own day the challenge to all the churches to live, in hope if not in fact, by the maxim that the church is truly only and only truly itself when it is together and does together everything that it can be together.”

“By crossing the fault-lines of fear, John Sullivan asks: Is what unites more life-giving than what divides? and also the secondary encouragement: Please keep searching for what unites!”