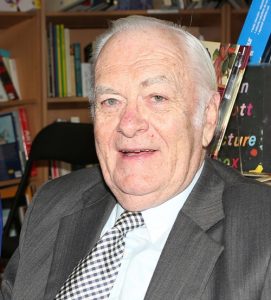 President Michael D. Higgins has led tributes to Fr Jack Finucane C.S.Sp., a key figure in Concern Worldwide from soon after its setting up in 1968, who died suddenly on Wednesday 7 June at Kimmage Manor in Dublin.

His lifelong friend Fr Mick Reynolds said he had been unwell in recent times. On Tuesday evening this week, Fr Jack came from his home in Stillorgan to the Spiritan headquarters at Kimmage Manor for treatment.

“The next morning he was watching the All Blacks in my room and then he went to the retreat conference and visited the doctor.” At lunchtime Fr Jack lay down for a rest. “He was still making phonecalls,” said Fr Reynolds. Just before 4.00 pm, a nurse looked in on him and discovered that he had died. “It was very quick,” commented Fr Reynolds, who knew Fr Finucane and his brother Aengus all his life.

Fr Jack Finucane and his late brother Fr Aengus Finucane earned worldwide recognition for their famine relief efforts in the late 1960s when they shipped thousands of tons of food to the starving Biafra region on a daily basis.

“He was a doer. He would think ‘There is a job to be done. There are hungry people to be looked after. Let’s do it’,” Fr Reynolds told CatholicIreland.net.

Unlike his brother, Fr Jack avoided the limelight. “Aengus was flamboyant, open and loud,” commented Fr Reynolds. “Jack was retiring but very efficient in the way he worked for Concern.”

He recalled how Jack always insisted on good food and proper houses for the missionaries and Concern workers, “because in the 1800s when the first Holy Ghost Fathers went to Nigeria, they were told to live with the natives and they were dead within six weeks because they couldn’t take the food,” recounted Fr Reynolds. 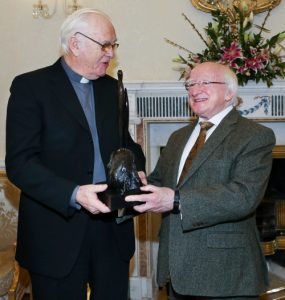 Asked what he would remember of his friend, Fr Michael paused – there were so many memories. “We were very close. We climbed Kilimanjaro together. We walked the Great Wall of China together. We drove through Communist Eastern Europe together and we played golf together.”

Leading tributes to Fr Finucane, President Higgins described the priest as a “humanitarian” and said he and his late brother Fr Aengus Finucane were inspirational figures among the large group of people in Ireland who value and embody the importance of the humanitarian spirit.

“Theirs was a distinctive voice and their life’s work leaves a real, positive, and enduring legacy for millions of people across the globe, as well as having contributed to Ireland’s reputation abroad in the best possible sense.”

President Higgins recalled meeting Fr Finucane in Somalia during the Famine, and on many occasions since, and said “His commitment to the ethical basis for, as well as the practical application of humanitarian principles was exemplary. Jack Finucane’s lifelong commitment to protecting the dignity of some of the world’s poorest and most marginalised people will stand not only as a lasting tribute to all that is good about mankind, but is exemplary in its invitation not to avert our gaze from our current challenges of global hunger and poverty.”

Fr Jack Finucane came from Limerick. He was ordained in 1963 and, following in the footsteps of his older brother and fellow Spiritan missionary the late Fr Aengus Finucane C.S.Sp., Fr Jack was appointed to Nigeria.

From 1969 to 1970 he worked in the role of Director of Relief Programmes during the Nigerian Civil War (Biafran War), an event he acknowledged would forever change his life. With many others, he was briefly imprisoned after the war and expelled.

At the end of the war in 1970, Fr Jack and his fellow Spiritans were expelled from Africa. He spent some time teaching in Rockwell College in Tipperary before heading up Concern Worldwide’s work in Bangladesh and Ethiopia.

Fr Jack Finucane’s funeral Mass will take place at the Holy Spirit Church, Kimmage on Monday 12 June at 11.30 am.