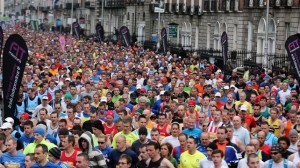 A Co Louth parish priest will be among the 14,500 competitors taking part in today’s Airtricity Dublin City Marathon.

This is Fr Gerry Campbell’s third Dublin Marathon and this year he is doing the run to raise money for Trócaire’s Emergency Appeal for Syrian refugees.

Based in the parish of Kilkerley, the Co Tyrone native is the Catholic agency’s representative in Co Louth.

Speaking ahead of the race, he admitted that the training schedule required self–discipline, but he added that “the images of the plight of Syrian families who are forced to leave their homes to seek food and shelter in other countries” kept him motivated.

Trócaire has said it is hoping he runs “like the wind” which in view of stormy conditions predicted for the event might make Fr Campbell a force to be reckoned with! Participants are expected to have to cope with the worst weather conditions for years.

In 2010, Fr Campbell took part in the Belfast City Marathon for the second time in the relay category with four other priests. 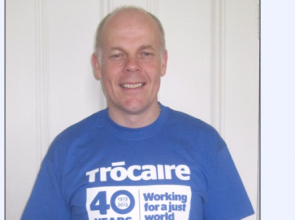 He was also part of a relay team in 2007 when a group from the diocese of Armagh ran the race to raise funds for a Habitat for Humanity Building Project in Uganda.

“I was part of that building project in the summer of 2007 and the marathon relay was my first experience of running in public,” Fr Campbell told the Argus newspaper.

“In 2009, he decided to raise funds for the sound system in St Patrick’s Church, Dundalk and that is when he first did “some serious training to get myself fit for the Dublin City Marathon.”

“Now running is very much part of my exercise routine. It gives me a break from the daily grind, affords me time to think, besides keeping me healthy and giving me lots of fresh air,” he said.

While Met Eireann has said that Ireland should escape the worst of a storm forecast to hit the UK today, the weather will be windy with heavy showers, making it fairly miserable for runners.

Gardai are implementing rolling road closures from 8.55am to 4.45pm today along the marathon route, which runs from the city centre to the Phoenix Park, through Inchicore and Crumlin, and back to the city centre via Terenure and Rathmines.