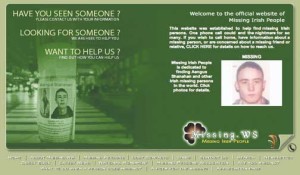 www.missing.ie which was set up by Fr Aquinas Duffy in 2000.

A priest who set up a website to help find people who go missing in Ireland has welcomed today’s launch of the first national missing persons day.

The launch at Farmleigh by the Minister for Justice, Equality and Defence, Alan Shatter, will also be attended by the Garda Commissioner, Martin Callinan, as well as more than 100 family members and friends of Irish missing persons.

Dublin priest, Fr Aquinas Duffy, has urged the public to pray today for the families of the missing, that they “would have the strength to persevere.” He explained, “It is so easy to give up.”

Fr Duffy suggested that Churches could hold services where people “pray for an end to the searching, whatever that outcome is.”

Asked about those disappeared by the IRA and other terrorist organisations, Fr Duffy appealed to anybody who has any information in relation to those still missing to come forward.

“Those families – it is absolutely harrowing to see the way they have been left waiting to have the privilege of a funeral,” he said.

The priest welcomed the decision by the State to make 4 December a national day for the missing as it “gets people’s attention” and focuses the media attention on the issue, which he said can help in promoting individual cases of the missing.

“Hopefully there are people out there who have information and this might just encourage them to come forward with that information. Hopefully, if there are people thinking of actually going missing voluntarily, this may actually prevent them from doing that,” he said.

Fr Duffy set up his website www.missing.ie in 2000 when his cousin Aengus Shanahan went missing on 11 February that year.

“The sad thing is that despite all the appeals through the website and a lot of media exposure he has never been found. His family at this point feel that he was murdered. And so they are in a situation like some of the disappeared – looking to recover his body so that they can have a funeral. That right has been denied them so far.”

He praised the way the Gardaí now handle cases of a missing person.

“I think things have changed for the better in the last number of years as by and large the Gardaí do everything they can in trying to locate a missing person and they try to act much more quickly now.”

“Back in 2000, they used to wait a few days before a person would be declared officially missing. They know now that once there is any hint of concern for the safety of the person they act immediately.”

“The other good thing that the Gardaí do now, which perhaps they didn’t do back in the year 2000, is that they use the media more immediately and in a much better way in order to publicise the case. The Gardai need the eyes and the ears of the public to help them in the search.”

It is located in the grounds of Kilkenny Castle and is constructed from 80 hands of family members of missing persons. “For many people it stands instead of the grave that they don’t have, a place where the families can go to reflect on their missing loved one – that is something that is very helpful.”