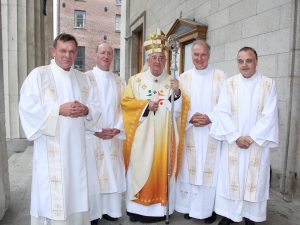 Archbishop Diarmuid Martin’s team has been boosted by the ordination of four married men to serve as permanent deacons. (Pic: John McElroy).

Four new permanent deacons were ordained over the weekend.

The deacons will assist in the pastoral and spiritual work of parishes in the Archdiocese of Dublin.

The four new permanent deacons – Gerry Malone from Blessington, Don Devaney from Clondalkin, Greg Pepper from Westland Row and Noel McHugh from Castleknock – were ordained at the pro-cathedral, St Mary’s Church, on Sunday June 3, the Feast Day of St Kevin. All four are married men.

“Those called to evangelise must be ministers of Jesus and his love and that alone,” said Dr Martin. “Otherwise, they witness only to themselves, their ambitions, their passions, their harshness and nastiness, their greed.”

Archbishop Martin said that those called to ordained ministry – priests and deacons – must be outward looking, because an inward-looking Church is inevitably reduced to being only “a comfort-zone for the like-minded”.

“An inward-looking Church becomes a sign of the lack of the Spirit,” Archbishop Martin said. “It was the Spirit who gave the early Christians the courage at Pentecost to overcome their fears and anxieties and go out, helped by the Spirit, to speak of Jesus in a language that everyone could grasp.”

The permanent deaconate is a voluntary part-time ministry, for married or single men. The areas of ministry entrusted to permanent deacons fall under three general headings: altar, word and charity. Deacons can assist the priest at the celebration of the Eucharist; they can celebrate baptism and marriage and preside at funerals. They also facilitate visiting the sick, prisoners and the bereaved, and promote awareness of the social teaching of the Church.

In partnership with priests and parish pastoral workers, their role includes supporting the structures which allow for the participation of the lay faithful in a range of ministries in the parish and in the wider community.

With the addition of these four men, the Archdiocese of Dublin now has 26 permanent deacons. Additionally, there are 15 women and nine men who serve as parish pastoral workers. As the number of priests decreases, the number of lay volunteers increases.