Rev Fergal Cummins of the Diocese of Meath. Pic courtesy of Meath Diocese.

Houses of formation must be marked by harmony, prayerfulness, generosity and care while divisiveness and narcissism are never the signs of the Spirit, Archbishop Diarmuid Martin said in his homily as he ordained four new deacons at the national seminary in Maynooth on Sunday.

Archbishop Martin, who is a trustee of Maynooth, explained to the assembled congregation of family, friends and confreres that through the laying on of hands and the prayer of consecration, he was ordaining the four men for service in the Church.

The ministry of the deacon, Dr Martin said, must be a ministry of integrity and not of compromise. 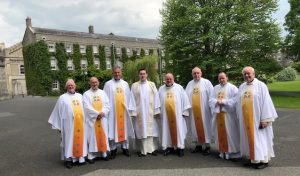 He told the four deacons that being a herald of the Gospel of Christ meant that the four “believe what you read, teach what you believe and practice what you teach”.

The work of spreading the Gospel could only be carried out by those who reject worldly power and ambition, he said and added that those called to evangelise must be ministers of Jesus and his love and that alone.

“Otherwise they witness only to themselves, their ambitions, their passions, their harshness and nastiness, their pettiness, their greed, and they become ministers of evil rather than of Jesus Christ.”

The Archbishop also stressed that an inward-looking Church slips inevitably into becoming a “self-centred contented, safe, comfort-zone for the likeminded. It becomes a sign of fear rather than courage” and risked also becoming an “arrogant” church.

Twenty-eight-year-old Deacon Fergal Cummins from Ashbourne entered Maynooth in 2012. Before joining the seminary, he studied Environmental Science at DIT Bolton Street and he worked in human resources at the Mater Private Hospital.

Rev Cummins will serve as deacon in the Diocese of Meath where he will be ordained a priest later this year. He will assist at St Mary’s Parish, Drogheda over the summer.

Rev Ricky O’Connor is twenty-five-years-old and the eldest of three boys. A convert to Catholicism, he was born in England and moved to Ireland when I was 12 years old.

He was raised without any religious faith and had no particular interest in religion in his early teen years but this changed when he bought a copy of the Bible and began to read it himself in his late teens. 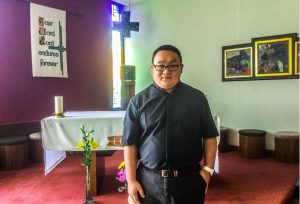 Rev Gerhard Osthues SVD was already professed as a Brother with the Divine Word Missionaries, when in his 50s he decided to explore the call to priesthood.

Originally from Germany, he came to Ireland to study to become a priest.

He joined the Society of the Divine Word (SVD) in Shijiazhuang, the capital of Hebei province, China, in 2010 at the age of 23.

He professed his first vows in 2012. In April 2014, he arrived in Maynooth to study English and  continue his theology studies towards priesthood.