Home > News > Death of the founder of EWTN: Mother Angelica

Death of the founder of EWTN: Mother Angelica 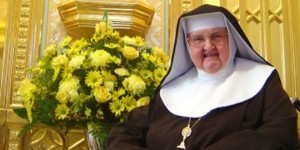 She died on Easter Sunday at her Poor Clare monastery of Our Lady of Angels in Hanceville surrounded by the prayers and love of her spiritual daughters, sons and friends according to her order.

She had been ill since 2001 when she suffered a major stroke.

Her funeral Mass will be celebrated 1 April. Fr Joseph Mary Wolfe, a Franciscan Missionary of the Eternal Word, will be the homilist.

A member of the Poor Clares of Perpetual Adoration, Mother Angelica set up Our Lady of the Angels Monastery in Alabama in the US before establishing EWTN in 1981 with $200 and no experience in broadcasting.

It is now broadcasts programmes 24 hours a day via cable and other technologies to 144 countries around the world and over 200 million homes.

A native of Ohio, Rita Rizzo joined the Poor Clares of Perpetual Adoration when she was 21 in 1944.

Last November, she was placed on a feeding tube as she continued to battle the effects of earlier strokes.

In February, members of her religious order said she was in delicate condition and asked for prayers for her.

Prior to starting EWTN, Mother Angelica was renting studio space from a Birmingham television station to produce videotapes of her talks on religious issues for airing on the Christian Broadcasting Network.

She broke with them after the network aired a movie she considered blasphemous.

She was involved in a number of public confrontations with the bishops in the US.

In 1993, she attacked a World Youth Day event during Pope John Paul II’s visit to Denver as “blasphemous”.

The bishops hit back and Mother Angelica invited everyone who disagreed with her to leave the Church.

EWTN’s radio operation includes a global shortwave broadcast; satellite and Internet radio channels; and more than 300 Catholic radio affiliates in the US.

The nonprofit broadcaster reported total revenues of $46 million in 2013, the last year for which tax records are available. Of that, $45.4 million came from donations.

Here in Ireland the station is available on SKY channel 589, UPC channel 815, Eircom eFibre 589, Casey Cablevision 801 (in the Dungarvan Area) and online at www.ewtn.ie.

It is also available through a ROKU Box Internet TV and on free to air satellites: Hotbird and Astra 2 though Ms Peer noted the frequencies have recently changed.

EWTN Ireland also produces a number of programmes from Ireland, like talks from lay missionary Frances Hogan at the Maranatha Retreat in Limerick or Three Wise Women presented by Catherine Wiley, Dana Scallon and Kathy Sinnott who share “a lifetime of experience and wisdom rooted in faith and love, discussing the front line of business and family life with its joys and sorrows, and invite weekly guests to join in on the mix”.

Although Mother Angelica began the station, none of the sisters from the Poor Clares of Perpetual Adoration monastery in Hanceville, Alabama has continued her ‘front of house’ apostolate to the public, but the monastery prays continuously for its ministry.