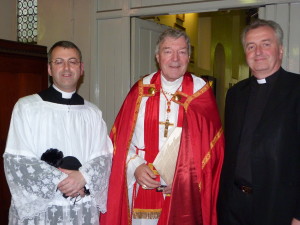 Cardinal George Pell, the Prefect of the Vatican’s Secretariat for the Economy, will attend an international liturgy conference in Cork at the beginning of July.

Fota VII, which is hosted by St Colman’s Society for Catholic Liturgy, will focus on priestly identity and will be chaired by the Australian cardinal, who is one of Pope Francis’ key eight advisors and previously Archbishop of Sydney.

The conference will also hear papers delivered by American prelate, Cardinal Raymond Leo Burke, and Bishop Philip Boyce of Raphoe. The theme of this year’s conference is In Persona Christi Agens: Aspects of the Ordained Ministry.

Speaking to CatholicIreland.net, Mgr James O’Brien, who is a priest of the diocese of Cloyne, explained that Cardinal Pell has been a supporter and patron of the Fota Conference since its inception. He presided at Fota II in 2009.

“He has guided its course in many ways over the years and has actively encouraged the initiative as well as the speakers who come and deliver papers. He has also promoted it in Australia and in the US.”

He said Cardinal Pell had a particular interest in the liturgical question and has spoken at length on numerous occasions about it.

“It would probably be true to say that the subject of this year’s conference, priestly identity, has also long been of interest to him.”

As Prefect of the Secretariat for the Economy, the Cardinal is responsible for the annual budget of the Holy See and the Vatican.

According to Mgr O’Brien, the Australian prelate will be working up to the last minute before leaving Rome for the conference and therefore St Colman’s Society don’t intend to make too many demands on him.

The Fota Conference is open to the general public and anyone, clergy or laity, who has an interest in the liturgy, and the Church’s theology, is welcome to attend.

“The Conference is pitched at a medium level so as to make it as accessible as possible to as many as possible. It is not, and never was, a round table chat for the super experts among themselves,” according to Mgr O’Brien.

He said the profile of the Fota conference has been increasing since it began seven years ago.

“We have published approximately 60 papers, and we have a further 12 in the editorial process; and further 12 to 14 from this year’s conference.”

In September this year, the German translation of Fota I will be published by Pustet in Regensburg, edited by Manfred Hauke, who has spoken at the conference a number of times and with an introduction by Cardinal Kurt Koch, president of the Pontifical Council for Promoting Christian Unity.

“We are glad to notice that the volumes produced by the Conference tend to turn up in scholarly works and are clearly the source of further inquiry by theology and liturgy students – more so in the United States, Rome and in Germany,” Mgr O’Brien told CatholicIreland.net

“From the point of view of the participants, the standard has always been high. We tend to try and have a panel which includes well established academics, scholars starting out on their academic careers, competent amateurs, men and women, lay and religious, and also some non Catholics from time to time.”

“While the backbone of the conference is a German/American axis, to this we add people drawn from Italy, Switzerland, France, Australia, Sri Lanka, Great Britain, and also from Ireland.”

On Saturday 5 July, Bishop Philip Boyce will address the conference on ‘The Priest as Intercessor in the Writings of John Henry Newman’.

The day’s proceedings will conclude with Pontifical Vespers at Sts Peter and Paul’s Church in Cork celebrated by His Eminence Raymond Leo Cardinal Burke.

On Sunday, Pontifical High Mass at Sts Peter and Paul’s will be celebrated by His Eminence George Cardinal Pell.

The music for the Pontifical High Mass will be supplied by Dr Ite O’Donovan and the Lassus Scholars.

This year, the ordinary of the Mass is Pier Luigi da Palestrina, the propers are taken from the Choralis Constantinus of Heinrich Isaac, Kappelmeister of the Imperial Chapel in Innsbruck -a complete set of Masses for each day of the year written by him for the for the Cathedral of Constance for use during the Council of Constance. 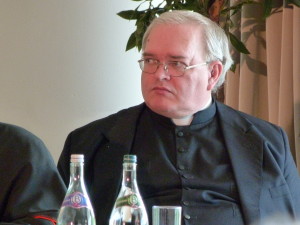 Dr O’Donovan also plans to use some of the music of Peter Philips, a pupil of William Byrd and an English exile in the Low Countries who became Kappelmeister to the Archduke Albrech in Bruxelles. Philips’ music will also be used for the Pontifical Vespers.

Meanwhile, on the same day, Cardinal Burke will celebrate the Pontifical High Mass in Limerick at the Sacred Heart Church.

According to Mgr O’Brien, Cardinal Burke has been hoping to have such an opportunity since the church re-opened under the Institute of Christ the King.

The Mass on the Monday of the conference by tradition is usually celebrated by a newly-ordained priest.

This year, the celebrant will be from the Institute of Christ the King and the music will be sung by Dr O’Donovan and the Lassus scholars.

Copies of the proceedings of previous Fota conferences are available from Four Courts Press. See: http://bit.ly/1nYBoDp and from www.smenospublications.com