Forty new recruits were sworn in as members of the Pontifical Swiss Guard on Saturday to serve as the Vatican’s ceremonial troops and as the Pope’s personal bodyguard. 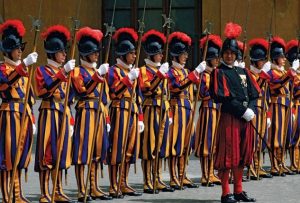 The swearing in ceremony always takes place each year on 6 May, the anniversary of the Sack of Rome in 1527, when 147 Swiss Guards gave their lives defending Pope Clement from marauding troops who were loyal to the Habsburgs. However, this year Pope Francis told his new guardsmen that they “are not called to this heroic offering of your physical life, but to another sacrifice no less arduous: to serve, that is, the power of the faith.”

Continuing, the Pope said: “Faith is an effective barrier to resist the various forces and powers of this world, and above all he who is ‘the prince of this world’, ‘the father of lies’, who ‘goes about like a lion, seeking someone to devour’.”

To become a Swiss Guard, the 40 new recruits had to be unmarried male Swiss citizens aged between 19 and 30, who had completed basic training with the Swiss Armed Forces, and who are at least 1.74 m (5 ft 8.5 in) tall. They serve terms of service of between 2 and 25 years. In 2015, the basic pay was €1,300 a month, plus board and lodgings, with extra paid for overtime.

The 2017 cohort is the first to undergo a revised training programme that includes a month spent at the Swiss Guards’ School at Isone in the Swiss canton of Ticino and then further training in the Vatican itself.

During most of the twentieth century, the Swiss Guards were primarily seen as having a ceremonial or even decorative function, with their traditional blue, red, orange and yellow uniforms adding colour to Vatican events and daily life.

However, following the assassination attempt on Pope John Paul II in 1981, a much stronger emphasis is now placed upon their non-ceremonial roles. Guardsmen are now equipped with small arms, and Swiss Guards in plain clothes accompany the Pope as bodyguards when he travels outside the Vatican and outside Italy. Of course, during their training there is a strong emphasis on unarmed combat and on disarming would-be assailants.

Pope Francis told the new recruits that they should use their time in Rome for personal spiritual growth, saying that by following in the footsteps of the saints of the Eternal City they would make their time in Rome “even more unforgettable and rich in fruit”.

Established in 1506 by Pope Julius II, the Pontifical Swiss Guard is one of the oldest military units in continuous operation.