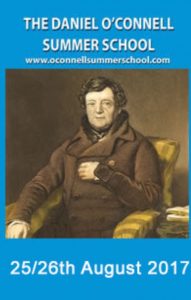 The summer school takes places annually to commemorate the memory of the former MP and founder of Catholic Emancipation in Ireland, Daniel O’Connell. It commences on Friday morning 25 August and the opening address will be delivered by RTÉ Political Correspondent Micheál Lehane, who is a native of Cahersiveen.

The opening sessions of the popular summer school will examine issues such as Daniel O’Connell’s life and politics, and will be held in the library in Cahersiveen on Friday 25 August.

‘South Kerry: Plans and Progress’ is the topic for a Friday session to be addressed by Kerry County Council CEO Moira Murrell, Professor Jim Walsh of NUI Maynooth and MEP Sean Kelly.

‘Daniel O’Connell and his Worlds in Kerry’ will be among the topics addressed on Saturday by Sir Adrian Fitzgerald, who is the 24th Knight of Kerry, Dr Ciaran McDonnell of UCD and Dr Conor Brosnan of Dingle.

Dr Tom McGrath will deliver a lecture entitled ‘Daniel O’Connell and Bishop Doyle’ on Saturday. Dr McGrath is Vice President for Academic Affairs and Registrar at St Patrick’s College, Carlow, and has written an acclaimed multi-volume biography of Bishop Doyle, one of the most influential Catholic bishops during the nineteenth century and a sometime critic of O’Connell and his views.

Mr John Bruton, who was Taoiseach from 1994 to 1997 and former EU Ambassador to the United States (2004–2009), will give the Daniel O’Connell lecture at 3pm on Friday. He is currently chair of the IFSC (International Financial Services Centre) as well as other public and private bodies.

A special memorial Mass for the O’Connell family will be celebrated by the Bishop of Kerry Most Rev. Dr Ray Browne, followed by a reception in the Caherdaniel on Sunday 27 August.

Derrynane House and Gardens, early home to O’Connell, will be open free to the public for the day as part of the contribution of the Office of Public Works to National Heritage Week.

Speaking about the summer school, Cahersiveen-born Professor Maurice Bric, who is the Director of the School, said that “unlike some of the other Summer Schools, the Daniel O’Connell School does not have a specific theme. Instead, we offer a mix of lectures on local, county, national and international history. Of course, we will also have a section on the life and times of O’Connell himself and how he continues to influence the Ireland in which we live today”.

The Daniel O’Connell Summer School was originally set up during the 1980s when it was directed by Professor Maurice O’Connell and Tom Barrington. It was revived in 2013.

It is organised by a local committee, including Mary O’Connor (Derrynane) and Junior Murphy (Cahersiveen). Professor Maurice Bric is the Academic Director. He is a native of Cahersiveen and teaches history at University College Dublin. The panel of speakers includes people from the area as well as historians and writers whose work has dealt with Kerry and Ireland.

More information, including a full programme of events, can be had by accessing www.oconnellsummerschool.com/programme-2017