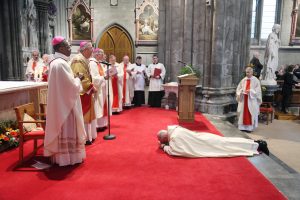 Former Taoiseach John Bruton has paid tribute to the new Bishop of Ossory, describing him as “a highly efficient administrator” who “gets things done” and who knows when to speak and when not to speak.

In comments to CatholicIreland.net after the Episcopal Ordination of Bishop Dermot Farrell at St Mary’s Cathedral in Kilkenny on Sunday, Mr Bruton said the former president of Maynooth and parish priest of Dunboyne, Co Meath was “extremely tactful and extremely charitable”.

“As a parishioner in Dunboyne of the then Monsignor and now Bishop Dermot Farrell, my wife and I are very proud of him becoming the Bishop of Ossory. We know him very well. He takes a huge interest in people and their lives, particularly when they face difficult times such as bereavement.”

He said Dr Farrell had been of particular help when his own father died. “That would be the story of virtually every family in Dunboyne – that Dermot Farrell shows tremendous compassion and interest and takes enormous amounts of time to help people through difficult moments in their lives.”

After the solemn ceremony in the recently renovated cathedral, Bishop Farrell said his main priorities would be preaching the Gospel as well as the shortage of vocations.

“If you look at the age profile of the priests, this is an issue for the whole Church not just for me as bishop. It is also an issue for the laity. Really, until people get fired up with an enthusiasm for this we are not going to have any improvement of the situation because vocations come out of the faith of the people and the prayer of the people. That is where vocations are going to arise from. Hopefully I can motivate that and push it on,” he said.

Another priority for Bishop Farrell will be care for “immigrants and the poor among us”. “They have suffered have a great deal in our country and we should be more conscious of that ourselves having been immigrants down the years when we went to the States and it was tough going.”

“We really need to look after people who come here – sometimes in extremely difficult situations. They are coming trying to establish a new life and we need to be generous rather than being negative and treat them properly as human beings.”

“Detention centres and direct provision are not giving people a dignity; they don’t have a door of their own, they don’t have a family table that they can sit around, they are cramped in a hotel room with parents and several children – it is completely inappropriate. Nobody in this country would put up with that. We have to reach out to all our political leaders to try and deal with this issue.”

On the Government’s proposals on abortion, Bishop Farrell warned that the legislation would result in the unrestricted access to abortion up to 12 weeks and in some cases beyond that. “We could end up with one of the most liberal laws on abortion and that is a very tragic situation,” he said.

“Anybody that has a vote has a role to play because it is a vote of the people of this country. The fundamental right on which all other rights are based is the right to life and if we don’t cherish that right you can’t talk about any other rights  – personal rights or civil rights or political rights because without life you don’t have any other rights.”

John Bruton said he did not believe that the Eighth Amendment should be changed. “I will not be voting in favour of repeal of the Eighth Amendment. It is true that we are probably one of the few countries in the world that has in our constitution an explicit recognition of the right to life of an unborn child – that is something we should be proud of,” he said.

The former leader of Fine Gael said he was “very pleased” that it was the Irish people who will make this decision, not anyone else. “The Irish people have control of this matter and there will be no legislation on abortion unless the Irish people, as I believe they will not do, were to change the existing provisions of the Constitution.”

He said the scientific evidence is clearly showing that before birth, babies can feel, are already developing their intellects, and developing their physical strength. “To arbitrarily say after whatever number of weeks it is ok to suppress that life – it is not in accordance with the values of charity towards the weak in our communities that have exemplified the Irish people over the last many centuries,” he warned.

Acknowledging that there was divided opinions on the matter, he explained his own view.

“I think if you accept that a child before birth is human, then you have to ask yourself, as a human, does it have human rights? If it is to have any human rights surely the first right it must have is the right to life – one cannot exercise or enjoy any other rights unless and until you have been allowed to live and see the light of day.”