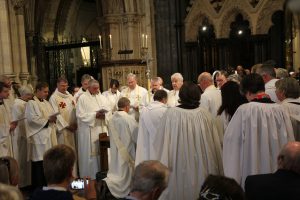 Former president of Ireland, Mary McAleese, gave the keynote address at the ordination on Sunday of two new priests for the Church of Ireland diocese of Dublin and Glendalough.

Rev Nigel Pierpoint and the Rev Kevin Conroy were ordained to the priesthood in Christ Church Cathedral by Archbishop Michael Jackson.

In her reflection, Professor McAleese paid tribute to the two priests saying that “In that Ireland where so many have turned away, Kevin and Nigel answered: ‘Here I am Lord’.”

She said that anyone who thinks that answer was easy need only look at the courage it must have taken to “change the course of their lives so dramatically, leave behind careers, to explain to families and friends, to blur the old distinctions of difference, to commit to a testing internship, serious studies and most important of all to commit to a future as signs of contradiction, by volunteering to join this most endangered of species – ministers of the gospel, ordained priests, men of God, servants of the People of God.”

She noted that the hard-earned peace and relative prosperity of 21st century Ireland had made the country “one of the more civilised countries on this troubled earth”.

Professor McAleese said that where once communal life was characterised  by a resilient faith, today many believers carry a grief and a loss of innocence in faith, in dogma, in religious institutions, that is captured almost prophetically in the final stanza of the Aisling poem Domhnall Og and she quoted the poem’s words. 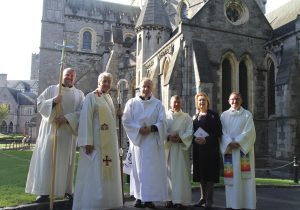 Professor McAleese said that in the grinding teeth of those storms of doubt and cynicism “these two men did not surrender to any counsel of despair. Instead they stepped out of the speeding mainstream and stepped up, ‘Here I am Lord’,” she said.

The Rev Nigel Pierpoint was made a deacon in Christ Church Cathedral, Dublin, last September.

A native of Dublin (Santry) he moved to Killiney after his marriage to Anne in 1983. They have two adult children, Claire and Stephen.

He has been a parishioner of Holy Trinity Killiney since 1983. He trained as a lay reader and has actively served the diocese of Dublin and Glendalough since 1985 until entering the Church of Ireland Theological Institute (CITI) in 2013.

He served his deacon internship in Christ Church Taney and returns there as curate after his ordination to the priesthood this September.

The Rev Kevin Conroy was ordained a deacon in Christ Church Cathedral, Dublin, in September 2014.

He is a native of Portlaoise and has been a parishioner of Wicklow for the last 15 years.

He is a former member of the Christian Brothers.