A well-known GAA footballer was ordained to the priesthood in St Macartans’s Cathedral in Co Monaghan on Sunday.

Fr Seán Mulligan secured a number of honours with his club, Scotstown, at all levels, winning two Monaghan Senior Football Championships with them in 1992 and 1993. He has also represented Monaghan county at Vocational Schools’, Minor, U’21, and senior level.

Welcoming Fr Seán’s ordination, the Diocesan Administrator of Clogher, Mgr Joseph McGuinness said his answer to God’s call was a “great grace and joy to the whole diocese”.

“The positive response to the call by Christ to his Priesthood is a powerful witness, especially in today’s culture. We thank God for this great gift.”

Mgr McGuinness added, “All of us look forward to ministering to God’s people in the diocese alongside Fr Mulligan.”

He went on to assure the packed cathedral that while the priesthood is challenging it is rewarding and very joyful.

“It is not a lonely place to be, despite what we are being told by some in our society today. Ministering to and with God’s people is a joy and one to which Fr Seán and others considering the call, will be made welcome,” he said.

Fr Seán Mulligan was ordained by Bishop Noel Treanor of Down and Connor.

Forty-seven year-old Fr Mulligan is a native of Knockatallon. He is the son of the late Michael and Philomena Mulligan. His two brothers, Paul and Michael, together with other family members were present to witness their brother’s ordination.

Priests from all over the diocese and further afield were present also, including Bishops Joseph Duffy and Liam MacDaid, Bishops-Emeritus of Clogher.

Deacons Martin Donnelly and Kevin Connolly served at the tables of the Word and Eucharist.

After working for three years in the concrete business, Fr Seán took up a post with Monaghan GAA, coaching the skills of Gaelic football and hurling to primary school children in the north-Monaghan area.

It was during this period that he felt a renewed inner-desire to serve God through the priesthood, but he chose instead to pursue a career in Intellectual Disability Nursing through DKIT and St Mary’s Residential Centre, Drumcar, Co Louth.

He spent five years working as a staff nurse in St Mary’s before finally answering the call to priesthood, entering formal studies for the Diocese of Clogher.

Fr Mulligan completed his studies at the Pontifical Irish College in Rome. The Rector of the Irish College, Mgr Ciarán O’Carroll was among the concelebrants at his ordination.

In his homily, Bishop Treanor told Fr Seán that in taking up the call to priestly ministry “you share in the centuries-old and perennially creative mission of making known the Good News of salvation for humanity and for the human condition”.

He said reaching into and engaging with the peripheries of human existence, Pope Francis has reminded Christians, is central to the work of the Church and to priestly ministry.

“Our words and actions cannot create new peripheries; rather, as the Instruction for Ordination puts it, we priests are to seek out the lost and to rescue them.”

Rescue work of any kind, and especially in the realm of the spiritual, Dr Treanor said requires much ongoing, life-long training; “it requires years of experience and good team work with skilled colleagues and mentors both lay and clerical.”

He said Fr Seán would see in the coming decades “many rich developments in the life of the Church” like the Permanent Diaconate, and new forms of Christian life and ministry will emerge under the impulse of the Holy Spirit. 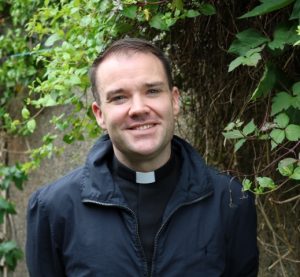 “With the bishop of the diocese it will be your vocation to discern and to foster imaginatively such ‘gifts’,” Bishop Treanor said.

Separately, Fr Sean Jones was also ordained to the priesthood for the Diocese of Kerry on Sunday at the Church of the Assumption, Moyvane.

It is the first ordination in Kerry since 2007. Two other men are training for priesthood currently in the diocese.

Following his degree in theology as a lay student in Maynooth, Fr Sean, who is in his 30s, joined the Pallottines but moved to the diocese of Kerry in 2013.

He ministered as a deacon in the parishes and pastoral areas of Listowel and Killarney.

He will celebrate his first Mass the following day in Moyvane at 7.30pm.