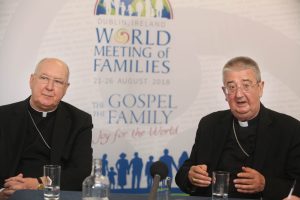 Cardinal Kevin Farrell, Prefect of the Vatican Dicastery for Laity, Family and Life and Archbishop Diarmuid Martin speaking to the media at the international conference on the family in the Helix in DCU. Pic John Mc Elroy.

Archbishop Diarmuid Martin of Dublin has expressed the hope that next year’s World Meeting of Families in Ireland will leave some legacy to help the country’s homeless families.

Speaking to reporters in DCU along with Cardinal Kevin Farrell, President of the Dicastery for Laity, Family and Life, the Archbishop said he hoped there would be a spiritual legacy but added, “We should also be looking at what can we do better to help [homeless] families.”

He was strongly critical of the toll the ongoing homeless crisis is taking on people.

“You’ve got those who are sleeping on the streets and it is disgraceful. You’ve got families living in hotel rooms which is a shame on our city. You have got young people who can’t start out a married life on their own because of the cost of housing.”

He said 50 new mini apartments for families would be opening soon on the former site of the Mater Dei Institute of Education on Clonliffe Road in Dublin.

The facility will be run by Crosscare (the social support agency of the Catholic archdiocese of Dublin) and the Dublin Region Homeless Executive.

This new family hub at the refurbished Mater Dei property is part of the government target of ensuring that families experiencing homelessness are accommodated in commercial hotels in limited circumstances only from July. The mini apartments are classified as supported temporary accommodation.

“It is transitional and so not ideal but it is to get people out of single hotel rooms. In mini apartments, they will at least have privacy,” the Archbishop explained.

He added that this is the third project for the homeless that the Dublin archdiocese is bringing to conclusion and said: “We are hoping it might be able to do more in the future.”

Dr Martin stressed that “having a decent place for people to bring up children in a healthy environment” was important and said the lack of social housing in Ireland must be addressed.

At the end of March, 870 homeless families were housed in commercial hotels and bed and breakfast accommodation in the Dublin region.

Over €15 million is being invested in eight new facilities for up to 240 families. The State is spending €4.5 million on the Mater Dei development.

Work on the facilities at Mater Dei as well as at Lynam’s Hotel, High Park in Drumcondra (for which Respond! is responsible), Clontarf, Clonard Road in Crumlin, Ballyfermot, Dundrum and Coolock is well advanced.

Crosscare has six services throughout the greater Dublin area for adults experiencing homelessness.

During 2015, the agency provided 92,270 bed nights to 1,471 people in six residences for people experiencing homelessness in Dun Laoghaire and Dublin 1, 7 and 8.

Services range from emergency accommodation, short-term housing with support services to help people make the transition to finding and keeping their own home, and permanent housing where Crosscare acts as both the landlord and the support agency.