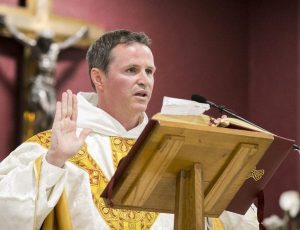 A former Manchester United footballer turned priest has spoken for the first time about how being a €600,000 a year footballer left him feeling unfulfilled.

Belfast-born Fr Philip Mulryne OP was recently ordained a Dominican priest by Archbishop Joseph Augustine Di Noia of the Vatican’s Congregation for the Doctrine of the Faith (CDF).

He celebrated his first Mass in Belfast on 10 July and will take up a position as chaplain at Newbridge College in Co. Kildare in August.

Speaking to RTÉ’s Sean O’Rourke about his decision to become a priest, Fr Mulryne (39) said that while he enjoyed his 13 years as a professional footballer which saw him play for Manchester United, Norwich and Northern Ireland, he eventually fell out of love with a “footballer lifestyle”.

He added: “There’s no running away from that. I obviously lived the life of a footballer and it’s well documented. Things were given to young men very quickly.”

Speaking about the lifestyle he said, “I had a Ferrari 360 Modena. I always said to myself, if I get to the Premier League with Norwich I’ll buy one of these. This was my dream car as a child. I had it for three months, then I sold it. I got bored of it.”

He continued: “At the age of 20 I had to stop and think, why is this stuff not satisfying me? I’m bored, it’s not enough, nothing’s ever enough.”

Fr Mulryne explained that he hit a low point after a World Cup Qualifier to England in 2005. He was sent home for breaking a curfew and going drinking. He said, “It was a turning point, it made me reflect more.

“As a footballer you’re caught up in the whole way of life. You never stop to take stock and think, this isn’t going to last forever. What am I going to do after?’’

Fr Mulryne took a year out of football in 2009 to return to Belfast, and later decided not to return to the game.

He added, “I have to say I found it tremendously liberating and freeing. To be caught up in that rat race of always accumulating and the pressure it brings, it was making me restless. The notion of living very simply from a faith perspective was very attractive to me.’’