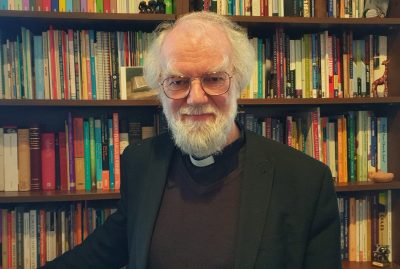 The former Archbishop of Canterbury, Lord Williams of Oystermouth, has said he would like to see the Christian Churches call more jubilees to promote fasting from flying, from long distance travel and buying new clothes.

Speaking to CatholicIreland.net at the Church of Ireland Theological Institute in Dublin, where he spoke on the theme, ‘Faith in Democracy?’, Lord Williams said he had taken a year off flying in the past and that currently he was trying to get his carbon footprint down again.

“I think it is one of those things which if properly presented, the Churches could interest people in. Maybe we should have a fast every so often from flying or long-distance travel.”

“I know that people will sneer about virtue signalling, which is always a formula used when people feel on the backfoot, but I think it is important that we remind ourselves that possession is not the default setting for humanity.”

He suggested that a jubilee might mean Christians pledging not to buy any new clothes for a year or not flying or tithing their income more systematically to a charity, and that this could happen one year in every seven.

“The Churches should give a lead,” he suggested and added that they should take their inspiration from the Bible.

“Of course it is difficult to put some of these things into practice, but that is the point – it is difficult because these patterns of behaviour are so deeply entrenched. But that doesn’t mean they are impossible or that it is just a waste of time or cosmetic.”

In a question and answer session after his lecture, Lord Williams referred to Leviticus as the inspiration for the jubilee idea as a principle that “from time to time society needs to pause – to step back and realise that human beings don’t own the world they are in”.

He also stressed that jubilee isn’t just about freedom from slavery but was also about giving the land a sabbatical “because the land isn’t ours, it is lent to us by God, as the biblical text says”.

The Church of England bishop said it was important to consider how to build into the rhythm of our lives a way to step back and remind ourselves that ownership is not what it is about.

“How often do we try to literally dispossess ourselves and clear out the superfluous, look again at our purchasing patterns and leisure patterns?”

He also reminded the audience that Lent was another means of addressing this issue.

In his address, Lord Williams said it was “crucial for a democracy to be liberated from the idea that majority votes end arguments”.

He regretted how the rhetoric of public argument these days seems to buy into the enemy rather than opponent model.

“Democracy is a system in which every voice has a claim to be heard. That doesn’t mean that decisions are impossible. What it does mean is that decisions can be challenged. So, a democratic decision may be taken by a majority vote but that does not of itself make it irreformable or unchallengeable, let alone right.”

Ongoing discussion and argument is, Lord Williams said, “the sign of a democracy that is working” because ongoing “arguing is a sign that the voices that have not prevailed are still being taken seriously”.