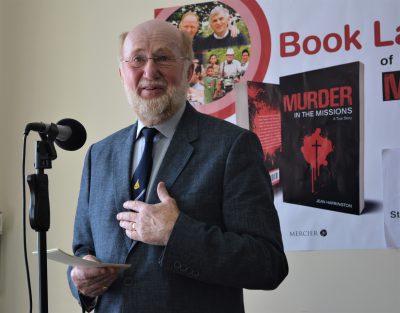 Former Attorney General (AG) Harry Whelehan paid tribute to the bridge-building and peacemaking which two Irish missionaries fostered between Christians and Muslims in the Philippines as he launched a new book on their lives at the weekend.

Describing Murder in the Missions by Jean Harrington as “an extraordinary book”, Mr Whelehan said it was not just the story of Columbans Fr Rufus Halley and Fr Des Hartford, but also the “story about how they thought outside the box, devised a new way of reaching out to their own parishioners and to Muslims and how they reached out to find the goodness in all the different warring factions and groups” in Mindanao where they were based.

Speaking in Butlerstown parish, Co. Waterford on Sunday, 75-year-old Harry Whelehan explained he had been invited to do the honours because he was a friend of Fr Rufus Halley’s from their school days in Glenstal Abbey and that the parish was where Fr Rufus Halley had grown up.

The former AG told CatholicIreland.net that Fr Halley had died in “the cause of trying to bring about peace and reconciliation between Muslims and Christian people, and between Christians, as well as between the warring factions of one kind or another in the Philippines”.

Addressing the assembled Halley and Hartford family members as well as parishioners from Butlerstown, he said it was “very touching” that the launch was taking place 18 years almost to the day after Fr Rufus had been killed in August 2001.

He explained that both Fr Rufus and Fr Des Hartford had taught tolerance and showed tolerance.

“What comes across in the book is the extraordinary freedom Fr Des and Fr Rufus and their contemporaries who came after them were allowed by the Columban Fathers to do their own thing in a way that they found effective and relevant in the particular circumstances that they found themselves.”

The book deals with the various achievements and tribulations of the two men.

Fr Des was captured, kidnapped and held for ransom for 11 days. “He had an awful time but was able to keep notes which the author got and she also interviewed him about why he came to be kidnapped, how he was held and how he was released and coped with that. It is, in itself, the work of a book – there is a book within a book.”

The book also sheds light on aspects of Fr Rufus including the time he spent each day in contemplation and prayer. “He had a lonely station because of the road he chose to travel and he sought great solace and great inspiration by praying and meditating.”

The book, Mr Whelehan said, showed the stance Fr Rufus took against the military in the Philippines over its attacks on Muslim neighbourhoods as well as his role in mediating peace between two warring Muslim factions.

He said the author Jean Harrington deserved “huge praise” for the “massive job” she had done in collating all of the information and the the travel she undertook to research the book and the interviews she did. It was, he said, an “amazing achievement to produce a most coherent, a most riveting and wonderful book”.

Speaking after the launch, Bishop Phonsie Cullinan of Waterford and Lismore told CatholicIreland.net that the lives of Fr Rufus and Fr Des were “a sign to us all that dialogue is absolutely necessary”. He paid tribute to the two priests and the Columban missionaries for their efforts to spread the faith in Asia.