One in ten people experiencing food poverty in Ireland

One in ten people suffer food poverty in Ireland today according to two trade unions who have called on the Government to aid organisations providing food for those struggling this Christmas.

“Food poverty means that someone missed a meal in the last fortnight because of a lack of money. It may mean they cannot afford a meal with meat or the vegetarian equivalent every second day or afford a roast or vegetarian equivalent once a week,” according to John Douglas, Mandate General Secretary and Congress President.

He added that anyone can suffer food poverty from lone parent families, to the newly unemployed, pensioners or people in work but who struggle on low wages.

His colleague, Unite Regional Secretary, Jimmy Kelly warned, “The figures released by Unite and Mandate show that food poverty is a reality in every county in Ireland.”

“Organisations providing food assistance are stretched to their limits, which is why we are calling on the Government to immediately make €10 million available to such organisations.”

He emphasised that the cause of food poverty will only be addressed by increasing incomes of the most deprived in society, and he called for an increase in basic social protection rates, and an increase in the minimum wage to help address the growing problem of in-work poverty.

He was speaking yesterday as Mandate and Unite released a map with a county-by-county breakdown of food poverty in the country. 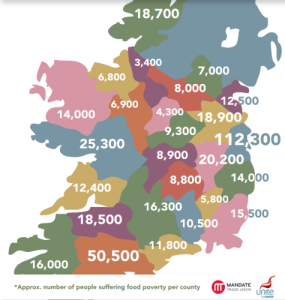 Dublin fares worst with 112,300 people suffering food poverty. Larger counties like Cork and Galway follow close behind, with 50,500 and 25,300 people in need of assistance respectively.

The map is part of the Hungry for Action document which also demands that the Government provide immediate aid to organisations providing food assistance pre-Christmas .

They demand an ‘Emergency Relief Budget’ in the New Year to start reversing cuts to low-income groups which have seen food poverty increase dramatically since the start of the economic crisis.

It also calls for an increase in the minimum wage.

The unions stated that poverty in Ireland today is part of a policy-made disaster. The collapse in incomes has been caused by austerity measures.