Warning that foodbanks are not solving UK food poverty 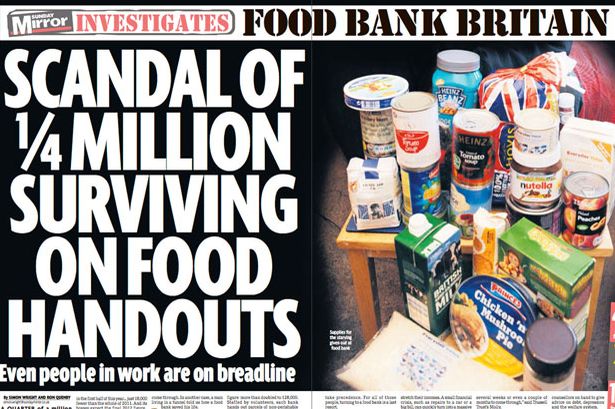 Needy families in the UK are returning subsidised and free food because they cannot afford to cook or heat it.

Several church leaders have criticised the so-called “heat or eat” phenomenon, which leaves people, as a result of cut backs and failures in the benefit system, only able to afford fuel or food but not both.

Cardinal Vincent Nichols has called on ministers to heed the cry of the poor and stop their “punitive” welfare reforms.

Speaking on the BBC’s Andrew Marr Show, the Cardinal said the increase in families in poverty who need to access foodbanks shows that the reforms are causing problems.

“A family in destitution, in a country as wealthy as this, is a disgrace, that should not happen,” he said.

Cardinal Nichols spoke of how Pope Francis encourages people through his example to “protect the dignity of people, even if they’ve got a deformed face, or are limited in their physical mobility, their essential human dignity is what they must uphold and protect.”

He said that the current welfare system needs reform but not by casting people into destitution.

Priests on the ground have told him that the reforms are not motivational and are seen as punitive. The Cardinal hopes to explore more deeply with priests and government officials the complex causes and reasons for poverty.

His comments follow an open letter from 27 Anglican bishops to the Daily Mirror at the start of Lent, stating that too many people have to choose between ‘heat or eat’ as a result of cut backs and failures in the benefit system.

In the letter, the bishops also wrote that politicians had a “moral imperative” to do more to control food price hikes and to make sure that the welfare system offered the poor an essential safety net from hunger.

The Anglican bishops highlighted that half a million people have visited foodbanks in the UK since last Easter and 5,500 people were admitted to hospital in the UK for malnutrition last year.

“We often hear talk of hard choices. Surely few can be harder than that faced by the tens of thousands of older people who must ‘heat or eat’ each winter, harder than those faced by families whose wages have stayed flat while food prices have gone up 30% in just five years,” the Bishops criticised.

In reforms of the welfare system many people have had benefits withdrawn and have to resort to foodbanks to eat.

BBC1’s Panorama reported on Monday 5 March that the relevant Government department (Work and Pensions) stated that local councils were best placed to provide emergency help to residents and had been given extra money to cover their costs.

The councils have spent almost £3 million over the last two years in assisting foodbanks.

In mid-February, Oxfam Scotland expressed major concern after figures revealed a surge in visits to foodbanks of more than 50% in January.

Danny McCafferty, chair of West Dunbartonshire Community Foodshare (WDCF), said that charities have been torn between letting people literally starve, or intervening through the establishment of foodbanks.

“What many had hoped would be a temporary measure is in fact being actively encouraged by the Westminster Government to become the new norm for delivering welfare to the destitute,” he said.

Overall, there were 358 visits to Foodshare’s three outlets in West Dunbartonshire in January – up from 237 in December 2013 – an increase of 51%. Some 41% of people seeking emergency support in January had families.

Of those users giving a reason for their visit, 36% said it was due to having their welfare payments sanctioned with others citing financial pressures and rising utility bills.

It has emerged that it is not just the unemployed, but also the underemployed or underpaid who are increasingly becoming reliant on foodbanks.

He continued, “Foodbanks are both a lifeline and a symptom of fundamental failure – they can never be seen as a long-term solution. Too many Scots don’t have enough to eat – that simply cannot continue.”

The issue of foodbanks was raised in the Scottish parliament in February.

Oxfam has renewed its call for politicians at both Holyrood (Scottish Parliament) and Westminster to take action in response to the growth in foodbank use.