Lord Mayor and business leaders team up for homeless 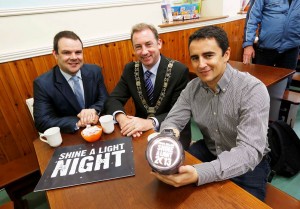 Geoff Scully, Managing Director Littlewoods, Ireland, Lord Mayor of Dublin Oisín Quinn and Ronan Harris of Google Ireland, who have all signed up to take part in Focus Ireland’s ‘Shine A Light Night 2013’ which will see over 100 top business leaders sleep out in Dublin & Cork on Oct 18th to raise over €500k for the charity’s work to combat and prevent homelessness.

Dublin’s Lord Mayor will join 100 top business leaders in sleeping rough in the capital to raise over €500,000 for Focus Ireland.

This is the second year of the homeless charity’s ‘Shine A Light Night’ event which raised over €370,000 in 2012, the first year it was held.

According to the charity, there are up to 5,000 people who are homeless in Ireland at any one time.

The majority have to stay in emergency homeless accommodation such as hostels with a small number sleeping rough.

“Worryingly 1 in 7 currently using homeless services is a child and last year we helped more than 8,000 people who were homeless or at risk of losing their home. We could not do this without quality partnerships and support from corporates,” Lisa-Nicole Dunne, Director of Fundraising and Marketing at Focus Ireland said at the launch of the 2013 initiative.

‘Shine A Light Night 2013’ will run in Dublin and Cork on Friday 18 October and Dublin’s Lord Mayor has teamed up with Focus Ireland to call on business leaders to sign up for the event.

He and the participating business leaders will undertake a sponsored sleep out in Dublin’s Iveagh Gardens that night.

Due to the fundraiser’s success in 2012, this year’s event has been extended to include a sleep out in Munster, which will take place in Cork City Gaol on the same night.

Each participating business leader  will raise or donate €5,000 to help Focus Ireland continue its work supporting the over 8,000 people who are homeless or at risk of losing their home.

Calling on business leaders to take part, Mayor Quinn said, “As Lord Mayor of Dublin I aim to represent all of its citizens including people who are marginalised through being homeless. I hope that by taking part in this great event we can raise funds for Focus Ireland’s important work and also help to raise awareness and understanding of the issues by ‘Shining a light’ on homelessness.”

“I can’t imagine what it must be like to have to sleep rough or stay in hostels and not have a place to call home, but I know it’s possible to help people to move on from this and I think it’s really important that we all play our part in helping achieve this. I hope the business community get behind this and sign up to take part this year,” the Lord Mayor added.

He was speaking as he joined up with Lisa-Nicole Dunne of Focus Ireland, Paul Grimes of Aviva Ireland and Ronan Harris of Google at Focus Ireland’s Coffee Shop & Advice and Information centre in Temple Bar, Dublin to invite business leaders to sign up for this year’s event.

The Focus Ireland Coffee Shop serves over 70,000 meals each year to people who are homeless or at risk. The centre also provides advice, information and support to help prevent people from losing their homes when they have reached crisis point.

Thanking the sponsors of the event, Aviva, Lisa-Nicole Dunne, Director of Fundraising and Marketing at Focus Ireland said, “It’s important to stress that this is not just about the terrible problem of homelessness. It’s also about prevention. The recession is taking a terrible toll on families all over Ireland and nearly 20% or mortgages are in arrears and many thousands of households are struggling to pay their rent. Focus Ireland can support people in this situation and work to try to prevent them from losing their home.”

Aviva and the 55 business leaders who took part last year raising more than €370,000, enabled Focus Ireland to settle 379 households which were homeless into a place they can now call home.

Many of those business people who participated last year will be joining in again this year including KPMG, Deloitte, RR Donnelly, KBC, and Littlewoods Ireland.

Speaking about the expansion to Cork, Paul Grimes, Ireland Branch Manager of Aviva, said it was “A great indicator of the success of last year. ‘Shine A Light’ is a unique and ideal way to highlight homelessness and indeed support Focus Ireland in the stellar work they do. It’s also a great way for business leader’s right across the country to show CSR leadership and promote a positive image of their business in the community.”

For more information log on to www.shinealight.ie or get in touch with the fundraising team 01 8815900 or [email protected]

The 2012 Shine A Light Event won the top prize of ‘Best National Fundraising Event’ at the Fundraising Ireland awards this summer.

You can also sponsor any of the executives are taking part by visitingwww.shinealight.ie/sponsor/