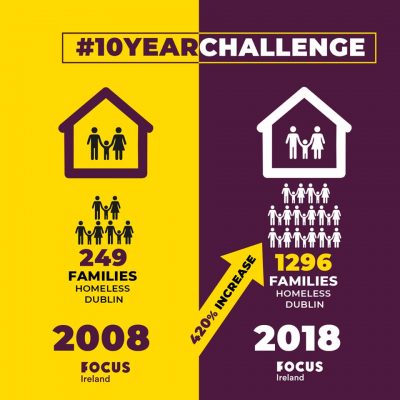 In recent weeks, social media such as Facebook, Twitter and Instagram have featured posts comprising side-by-side pictures, one taken recently and one taken a decade ago. Thousands of people have taken part in the mini-craze, which illustrates how well or not individuals have weathered over the last ten years.

Indeed, such has been the volume of people taking part in the online fad that some digital media specialists have pointed out that it has provided a rich source of data for IT companies developing face-recognition technology for use in mass surveillance applications.

Big Brother concerns aside, some have used the #10yearschallenge to highlight how aspects of life in general – technology, fashion, hobbies, etc. – have changed since 2009. However, Focus Ireland has gone one step further and is using the craze to highlight how homelessness has worsened drastically in the last decade – and there seems to be very little concern about this particular trend.

Because no national figures are available for homelessness a decade ago, Focus Ireland has had to work with statistics that apply to Dublin only. Nevertheless, these figures are shocking: in 2008 there were 249 homeless families in Dublin; since then there has been a 420 per cent increase, with 1,296 families now without a permanent home in our capital city.

In a statement accompanying the “then and now” graphic, Focus Ireland said: “There is a risk people can become desensitised to the depth of this crisis and we must always remember behind each single number is a child, a man or a woman who is homeless and who is suffering because of this.

“This is not just about trying to end homelessness. The Irish housing system is dysfunctional at present with people suffering from rocketing rents and a lack of security in the private rented sector while buying their own home is a distant dream for a growing number in our society.

“The Government needs to take more action to help fix our broken housing system. Delivering enough social housing to meet the needs is a key part of any healthy housing system and it will have the knock-on impact of freeing up much accommodation in the rental market.”