The reclassification of families experiencing homelessness in 2018 has hidden the true scale of the increase in homelessness, according to Focus Ireland.

The 2018 official figures for homelessness (adults and children) in Ireland produced by the Department of Housing Planning and Local Government show a 16 per cent increase in homelessness over the first eleven months of 2018.

The number of families who have been reclassified by local authorities as experiencing homelessness has increased by 23 per cent from the end of December 2017 to the end of November 2018.

However, Focus Ireland said that when those families who have been “reclassified” and removed from official homeless numbers are put back in, family homelessness has risen by 52 per cent.

“These families are still receiving homeless services and classified by local authorities as homeless. In hard numbers, that means that there are 745 more families and 1,600 more children in homelessness this year than last. This is the largest ever increase in family homelessness. These real numbers more closely reflect the experience of Focus Ireland services on the ground,” the charity said in its report.

The Department of Housing told Catholicireland.net in a statement that it publishes a monthly report on the numbers of individuals, families and dependents in emergency accommodation. During the compilation of the February 2018 homeless report, the department held discussions with a number of local authorities following “higher than expected increases in the numbers of families accessing emergency accommodation”.

After the corrected or reclassified figures were released in April, Focus Ireland advocacy director at that time Mike Allen responded that the Minister’s announcement that there were inaccuracies in the figures was “deeply disturbing”.

He added that there is a need for reliable data about homelessness. He called on the Minister to “move rapidly to re-establish confidence in the reliability of the figures by putting their publication under the control of the CSO and establishing a regular monthly date for their publication”.

Focus Ireland’s review of 2018 also highlighted that it worked with more than 15,000 people during the year. However, the charity added: “While a significant number of individuals and families have been supported to move on from homelessness, there have been a number of challenges that has seen homelessness increase again this year to new record highs.” 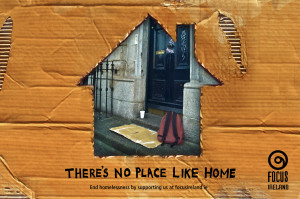 The challenges included the reduction in housing allocations by some local authorities, and the drop in the number of available private rental houses. This in turn has made it more difficult to find new homes to allow those in emergency accommodation to move on.

Focus Ireland also pointed out that while the majority of those in emergency accommodation are in the Dublin Region (67 per cent) in 2018 – and increased for the sixth year in a row –  homelessness and in particular family homelessness in the rest of Ireland has grown to unprecedented levels.

Focus Ireland research has shown that the majority of families entering homelessness had their last stable home in the private rental market.