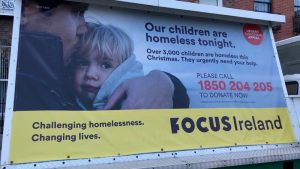 Homeless charity Focus Ireland has launched its Christmas Appeal to raise funds for and highlight the plight of the country’s homeless population.

In its appeal the charity says there are a record number of over 8,300 new homeless people, with more than 3,000 of them children.

Despite an €18m increase in funding for homeless services in Budget 2018, Focus Ireland say the numbers do not add up.

The charity has helped nearly 300 families out of homelessness this year, supporting 290 families and 556 children to secure a home and escape homelessness so far in 2017. However, they say for every family helped, up to three more become homeless the same day.

Speaking at the launch, the charity’s Life President Sister Stanislaus Kennedy, a member of the Religious Sisters of Charity, said “We work hard to support families and individuals every day and not just at Christmas, but we depend on donations now more than ever to raise funds so our services can cope with the constantly rising demand.”

She added “It breaks my heart to know that some of these children have been born into homelessness. Some of them will spend their first Christmas stuck with their family forced to live in one little room together.”

Focus Ireland said that while the crisis is still deepening, the situation would be much worse without the lifeline services and housing it provides.

Focus Ireland also issued new figures which reported that it has supported 600 more people in the first nine months of this year compared with the same period in 2016. It said that the State supports some of its work, but the charity also has to raise 40 per cent (or €2 out of every €5) of what it costs to keep its services and housing running through donations and corporate support.

Focus Ireland’s Christmas Appeal will see TV, radio, and outdoor ads running all the way up to Christmas.