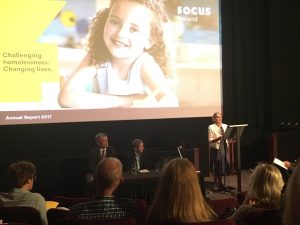 We should not be distracted by squabbling about the number of homeless people, Sr Stanislaus Kennedy said at the launch of Focus Ireland’s annual report.

“We should not be distracted into squabbling about numbers. Of course we need reliable data, but our main focus must always be the people and the solutions. How can we help to prevent them losing their homes or to find a new one?” said Sr Stan, as the founder of Focus Ireland is known.

In May Mr Eoghan Murphy, Minister for Housing, Planning and Local Government, said that “significant mis-categorisations” were found in preparation for the March homeless figures, which overstated the total number of people that are in emergency accommodation. NGOs and charities including Social Justice Ireland and Focus Ireland then called on the Minister to provide accurate data and re-establish confidence in the reliability of the figures.

“We are in the middle of the worst homelessness crisis in living memory and it’s vital we speak about this and call for more to be done. However, it’s important to also speak about the success stories, as these show homelessness can be ended,” said Sr Stan.

Present with her at the launch of the Annual Report was Alex McGrath, who spoke about the help he received from Focus Ireland after his landlord increased his rent and he became homeless.

“Before Focus Ireland came into my life I faced closed doors. Now the only closed door I face is my own when I get off the bus every evening. And I tell you it is great to have a home. I can plan for the future. Not just the day to day,” he said.

Focus Ireland Life President and Founder Sr Stan highlighted both the financial and human cost of homelessness as she said: “We need to ensure the money is spent wisely, but it is not the most significant cost. The most significant cost is to the people involved and to the fabric of our society. How can we stand by while families who are homeless are forced to live in one hotel room for months at a time?”

She added that over 250 families have to source their own emergency accommodation, and many struggle to find a hotel that will take them. Even when they get a hotel room, there is nowhere safe for the children to play, do their homework or for families to cook a meal.

“The damage done to families and children will not just affect this generation but may have lifelong effects. It must not be allowed to continue,” said Sr Stan.

Focus Ireland recognised that there is welcome progress in many areas, but maintained that the government is still failing to do enough to ease the crisis. In the year from May 2017 to May 2018, family homelessness has risen by 31 per cent across Ireland from 1,312 families homeless in May 2017 to 1,724 in May 2018.

“In recent months there has been a decline in the number of private rented/HAP properties on the market and in the number of social houses available. As a result, people are finding it increasingly difficult to move out of homelessness. Focus Ireland is calling on the government to take immediate action,” said Pat Dennigan, CEO, Focus Ireland.