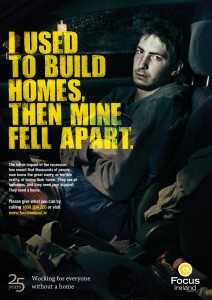 Focus Ireland has called on the Government to invest €500 Million in Budget 2015 to help deliver over 3,000 new homes to help tackle the growing homeless and housing crisis.

The charity made the call as it presented its pre-budget submission to the Joint Oireachtas Committee on Finance, Public Expenditure and Reform.

According to Focus Ireland, the investment will help to provide much needed homes as well as jobs to help kick-start the economy.

Mike Allen, Focus Ireland Director of Advocacy, warned the Government that it must take action to urgently deliver more homes not just more emergency accommodation if it is to stem the rising flow of families and individuals becoming homeless.

“The Government accepted before the election that the homeless situation is an ‘emergency crisis’ but we have yet to see a crisis response to this terrible situation,” he said in a statement.

He continued, “The housing crisis cannot be solved without substantial Government investment in public housing. We recognise that this investment will have to be delivered in innovative ways which do not undermine the Government debt position, but we cannot wait any longer for those mechanisms to be put in place.”

Describing Focus Ireland as the lead agency supporting families who have become homeless in Dublin, Mike Allen said it was “shocking that more than one family is becoming homeless every day in the capital city alone – with the number continuing to rise.”

Last month a further 39 families became homeless in Dublin, an increase on the April and May figures, he noted.

“Almost all of these families lost their homes in the private rented sector as they couldn’t afford their rent as their rent supplement didn’t cover it. We are doing what we can but it’s really hard to move them on due to the shortage of accommodation, so many are getting stuck as homeless.”

Focus Ireland’s Pre-Budget Submission calls for the Government to raise rent supplement rates on Budget day to stop the rise in the number of families losing their homes as they can’t afford to pay the rent.

According to Mike Allen, “The simple fact is that Government policy on rent supplement is one of the leading causes of the sharp rise of family homelessness in Ireland. The Government could stop many families from losing their homes with a stroke of a pen tomorrow.”

“It is not credible for the Government to accept the situation is at crisis point yet not change its policy on this key cause of homelessness.”

Focus Ireland said that rent supplement payments are insufficient to allow families to pay their rent – or for people who are homeless to get out of homelessness and find a place to live.

Focus Ireland welcomed the fact that the Government has initiated a process to review the maximum level of rent supplement which can be paid to bring them more in line with real rents, but the situation was continuing to deteriorate while the review is taking place.

The housing charity called for the review to be completed promptly, the decision announced in October’s budget and the changes introduced immediately thereafter.

The charity said that changes to petrol prices or VAT can be made with immediate effect on Budget Day so surely a move to keep families in their homes can be done in a similar way.

“Landlords can increase their rents every 12 months, and if the Department of Social Protection were genuinely concerned about the problems facing vulnerable families they would review their rental limits on the same basis,” Mike Allen said.

“If they had done that, realistic rates would have been introduced in June this year. For every day the Minister has delayed on this, families have lost their homes, resulting in trauma to children and also at a substantial cost to the state.”

The charity said it believes that Government claims that raising rent supplement would make the matter worse by driving up market rents are exaggerated.

Focus Ireland said the State could bring in some form of rent regulation to prevent this from happening and to also provide greater security to people living in private rented accommodation.