Home > News > Focolare in Syria: our only need is to live in peace

Focolare in Syria: our only need is to live in peace

Members of the Focolare Community in Syria

What makes us, the Church and the people here, suffer most is the constant outflow of our people, mostly Christians who are the very ones we would need to rebuild Syria, a member of the Focolare community in Damascus has reported.

Speaking on a recent ‘Link Up’ – a bi-monthly news programme on the internet watched by Focolare members and friends all over the world, Rada, a member of the community in Damascus, said  that the situation in Syria remained tragic “but we thank God that he is protecting many people.”

“We are saddened hearing news every day of people who have died or been wounded in the fighting, when different areas are bombed in the suicide bombings in the midst of innocent people,” she said.

Electricity and water cuts were also a huge problem and many were losing jobs and homes.

“It’s hard to see the way to peace because there isn’t the will to do it,” she told thousands of online viewers, including groups in Ireland.

“They’re leaving because after an absurd conflict which has killed 300,000 people, the men are no longer willing to be conscripted into military service or [to become] reservists, often to be sent to certain death.”

Rada said it was painful to see many members of the [Focolare] movement leaving and to see “the anguish of those who stay and who wonder whether they are making a mistake by staying.”

In spite of this, she reported, that the spirituality of unity is still “life for many people”.

“We meet regularly to deepen the spirituality and support one another,” she said.

The day before there had been a meeting for children and one for families in Damascus and that very day, the Youth for a United World in Damascus were together deepening the spirituality and talking about mercy and their relationship with God.

“They are praying for peace and all the young people who are in danger.” 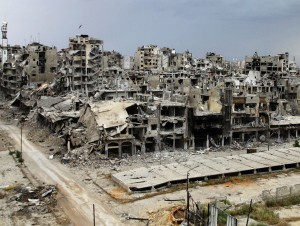 A week earlier, Rada recounted, Pascal a man from the Focolare community in Aleppo, met a group of members who had stayed in the ruined city of Homs who were delighted to meet up after such a long time, while she and others went from Damascus to two cities in northern Syria and met a group of fourteen young people.

Even in the midst of  war, people in different cities were getting to know the Gospel spirituality of the Focolare which stresses unity among all people.

“People want to live and their only need is to live in peace,” she said.

She continued: “We are truly praying intensely, together with the Pope and all of you, that God may stir the consciences of the leaders of the powerful nations to put aside their own interests and work for the peace that the Syrian people long for.”

She thanked people for their prayers and the “concrete help” they were sending from all over the world.

At the conclusion of her report, the President of Focolare, Maria Voce, assured Rada and all the Focolare family in Syria, that the movement was with them in spirit.

“Every yes that you say – you must know that the whole movement is saying yes with you and nothing is impossible to God. We are praying together for peace.”