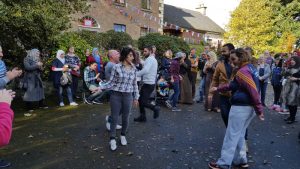 There were tears, smiles and blown kisses as 120 refugees from Syria boarded three buses to return to Monasterevin at the end of the Intercultural Party at the Focolare Centre in Prosperous, Co. Kildare last weekend.

Over 70 people from the village of Prosperous helped in preparing the party on Saturday 15 October, with local shops donating food, local schools donating furniture and bunting, and businesses supporting the event in other ways. “It was a proud day for the parish,” remarked parish curate, Fr Bill Kemmy.

On their arrival, the refugees – most of whom were Muslim – were greeted with applause, smiles and Irish music.

“It was a very emotional moment for us all when our brothers and sisters from Syria arrived in the Focolare Centre. I felt that having come through all the horror that must be present-day Syria, they had arrived in just the right place, somewhere where the mutual love amongst us could begin to heal their wounds of spirit and soul,” said Fran Meagher from Focolare.

Inside Curryhills House a banquet of vegetarian food awaited the Syrians. Some had a little English but many had none. “Somehow the language of care and courtesy bridged the gap as Irish and Syrians met and ate together, exchanging names and helping each other care for the children,” said one of the organisers.

Marian Byrne from Dublin described her conversation with a young mother from Damascus who had been studying law. “There were tears in her eyes as she spoke of the war and the bombs. Her mother and sister are still in Syria and she worries about them. There was so much warmth and love between us in a matter of a few minutes.”

Afterwards, Syrian and Irish joined in games, and some of the men were introduced to hurling. Inside, there was face painting, arts and crafts. Every so often the Syrian drummer would begin a drum beat and people broke into spontaneous dance. 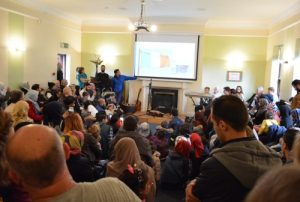 Syrians and Irish watch presentation on Ireland at intercultural party.

Later in the afternoon, everyone crowded into the hall of the Focolare Centre for a concert which opened with a short Powerpoint presentation showing Ireland to the group. In Arabic, it told of Ireland’s ancient civilisation, its Christian roots and its moments of profound suffering – like the Famine, when a million people died and 1.5 million fled the country as refugees. It also referenced  the country’s bitter civil war in 1922. The Syrians, some of whom had only arrived days beforehand, listened with great attention, many filming the presentation on their phones.

The concert included Irish and Syrian music. Music became the common language. “They really enjoyed the Irish music and it opened the door for them to share their music. There was a great sense of giving and receiving,” Fr Bill Kemmy told CatholicIreland.net.

At one point, a Syrian man took the mike. “The Irish aren’t human; they are like angels,” he said. The concert ended in an outburst of Syrian dance, during which everyone joined in, with one person describing it as “a mad Arabic Céili!”

“The great enthusiasm and love shown by the Focolare and friends and local people which was also reciprocated by our Syrian friends made me very happy and thankful to God for our shared humanity,” said Anna McHugh from Focolare whose involvement as a volunteer at the Monasterevin centre had been the impetus for the party.

For Fr Kemmy, the party reminded him of the Eucharist. “It is about what is here – our concern and how we look at the world and each other as brothers and sisters. But it is also meant to be a foretaste of the heavenly banquet. The gathering [on Saturday] was in some ways a heavenly image of people from the different nations, different languages, sharing a bit of happiness and love for one another,” he said.

The Focolare is an ecclesial movement of the Catholic Church that promotes peace and universal brotherhood (www.focolare.org). Its national centre is in Prosperous, Co. Kildare.