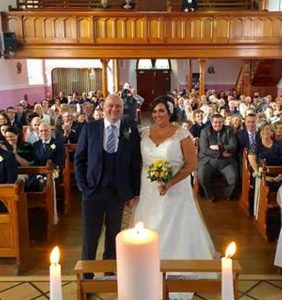 An impromptu ‘flash mob’ rendition of the popular hymn ‘How Great Thou Art’ at a wedding in Donegal has become an internet sensation.

After the wedding ceremony, as Fr Pat began to sing the song ‘How Great Thou Art’, a group of well-known Irish singers, men and women, stood up one by one in the congregation to sing a line or two of the beautiful hymn.

As they sang the first chorus, a group of seven men walked to the front of the church and took their places by the priest, facing the bride and groom. Then the women singers began singing the second verse before they too walked to the altar. Finally, the bride’s uncle, Daniel O’Donnell, took his place to the left of the priest and sang the final line.

The bride, dabbing tears from her eyes, was clearly moved by the serenade, at the end of which Fr Pat Ward was heard to say to the standing and applauding congregation: “Flash mob Catholic style!”

The bride and groom learned afterwards that the performers had not rehearsed beforehand and only planned how they would perform the song as they arrived for the wedding.

Three days later, the video had been viewed over 1.5 million times.

Afterwards, the new Mrs Swan spoke of her astonishment. “It was a total surprise. The only two people who knew were my friend Gavin who was one of the singers and my sister Fiona who was bridesmaid. It was a huge surprise to everyone else at the church,” she told the Irish Independent.

“Apparently there wasn’t an actual rehearsal, just a gathering in the church before the Mass began to discuss it. We had the best day ever and absolutely everybody said that the church was their favourite part of the day,” she said.