Qu’est-ce que c’est que ça? An Irish bishop travelled to Paris for the Confirmation of five members of the Irish community there. 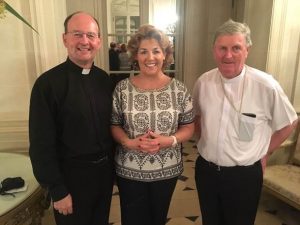 Bishop Michael Smith of Meath travelled to the French capital to be chief celebrant at the Confirmation ceremony held in the chapel of the Irish College on Rue des Irlandais in the Fifth Arondisement on Sunday.

The five candidates – Grace Alexander, Andre Gillotin, Samir Amriou, David Audebert and Evelyn Delaney – had all been prepared for the sacrament by Fr Dwayne Gavin, a priest of the Diocese of Meath who has been serving as chaplain to the Irish College since September 2013.

Fr Gavin’s tenure finishes at the end of August, and he is due to be succeeded as chaplain on 1 September by Mons Hugh Connolly, the former President of St Patrick’s College in Maynooth.

The Irish College in Paris dates back to 1578, when the Church began to develop purpose-built seminaries across Europe as part of the Counter Reformation, but the college grew in importance as a place for training Irish priests when Ireland’s faithful started to suffer as a result of the Penal Laws. Indeed, the Paris college was one of about 30 such institutions established across Europe for the education of Irish priests.

Such was the success of these colleges that the English government allowed St Patrick’s College to be founded in Maynooth to prevent young Irish clergymen from learning revolutionary ideas on the continent.

It has long ceased to be a place for the formation of priests, but it remains a focal point for the Irish community in Paris and in France. Indeed, since 2002 the college has been home to the Centre Culturele Irlandais and many Irish cultural events take place there throughout the year.

At the Confirmation ceremony, Bishop Smith paid tribute to the faith and pastoral life of the Irish community in Paris, where terrorism and fear have been a particular reality in recent years.

Afterwards, Fr Gavin spoke about his life as a chaplain to the Irish community. “It has been a great blessing to serve in Paris for the past four years,” he said.

“There is a thriving faith community here, comprising young families, students, academics and long-standing Irish residents of Paris and the surrounding area. We also regularly welcome Irish people visiting the city for work or holiday purposes. The work of the Irish chaplaincy includes the celebration of the Eucharist, preparation for the Sacraments of Baptism, First Holy Communion, Confirmation and Marriage, pastoral visits to Irish people in prison and in hospitals as well as the accompaniment of those bereaved while in Paris.”

Earlier in the week, the Irish ambassador to France, Geraldine Byrne Nason, hosted a dinner at the Irish Embassy in honour of Bishop Smith and his companions, Fr William Coleman, the parish priest of Rochfortbridge, Co. Westmeath, and Fr Brendan Ludlow, who is the Meath Diocesan Education Secretary.