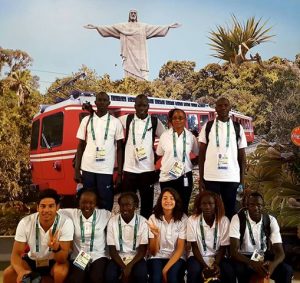 The first-ever Refugee Olympic Team will compete in the 2016 games which begin at the end of the week in Rio de Janeiro.

At a press conference on Sunday (31 July 2016), five South Sudanese spoke about the conflict which made them leave their country as children.

Since then they have lived at the Kakuma refugee camp in Kenya, where they had very little.

Running proved a welcome distraction from the hardship of daily life.

Now middle distance runners, they all hope that one day they will compete under their own nation’s flag.

“We will not be refugees forever, I believe,” said Rose Lokonyen, who is 23. “I feel very excited. This is the first chance for the refugees to participate in the Olympics and to give us hope, for us to encourage the young generations of fellow refugees who are remaining in the camps maybe to continue their talent.”

They have grown up without immediate family, but they feel that in the refugee camp there was always someone to look out for them and all of this extended refugee family will watch  the games. 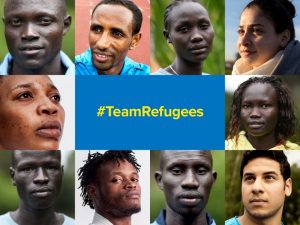 The team of ten includes two Syrian swimmers, two judo experts from the Democratic Republic of the Congo, a marathoner from Ethiopia and five middle-distance runners from South Sudan.

“Their participation in the Olympics is a tribute to the courage and perseverance of all refugees in overcoming adversity and building a better future for themselves and their families,” said UN High Commissioner for Refugees, Filippo Grandi.

This initiative comes at a time when more people than ever, 65.3 million at last count, have fled their homes to escape conflict and persecution.

The squad representing them in Rio hopes to give the world a glimpse of their resilience and untapped talent.

“We have a message to tell the world: We have come as refugees, we have come as ambassadors for refugees, now we are here to show you that we can do everything other human beings can do, and also be part of a peace promotion around the world,” said Yiech Pur Biel, who is 21.

Yiech, who will run in the 800 metres, has trained with some of his heroes in the Kenyan athletics team and has made huge improvement in his times over a few short months.

He was 11 years old when he arrived at the camp without his immediate family, who fled to Ethiopia and he has not seen them since.

Officially, the athletes will compete for the Refugee Olympic Team and march with the Olympic flag immediately before host nation Brazil at the Opening Ceremony.

Like all teams at the Olympic Games, the refugee athletes will have their own team to meet technical and other needs of the athletes.

Olympian and former marathon world record-holder Tegla Loroupe of Kenya is the team’s Chef de Mission, while Isabela Mazão of Brazil, who was proposed by the UNHCR, will act as the Deputy Chef de Mission.

They will lead a team of five coaches and five other team officials.

Tegla Loroupe of Kenya set up a Peace Foundation in 2003 under her name.

Following her running achievements, she sought out her Pokot community which was always fighting neighbouring Turkana, Karamoja and the Marakwet communities over grazing land and cultural demands.

She organized peace races that would unite the fighting tribesmen. Other races have also been organised elsewhere.

The Tegla Loroupe Peace Foundation also set up the Training Center for Refugee Athletes to train refugees for the 2016 Rio Olympics, and to help those with potential to exploit their talent, and become advocates of peace in the world through sports.

Athletes at the Center come from Dadaab and Kakuma – two of the world’s largest refugee camps.

As Oxfam ambassador to Darfur, Tegal Loroupe was on a visit to these camps when the idea of setting up a training center came about.