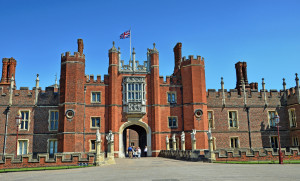 History was made on Tuesday night when Cardinal Vincent Nichols celebrated the first Catholic service to be held in the Chapel Royal in Hampton Court in 450 years, since the reign of Queen Mary I.

The Bishop of London and Dean of the Chapel Royal, Bishop Richard Chartres and the British Home Secretary Theresa May also took part.

Before Vespers, there was a discussion between Cardinal Vincent and Bishop Chartres on the theme ‘Faith and Crown’, examining the relationship between the Churches and the Crown, and the role of Christianity in society.

In response to Cardinal Nichols’ description of Catholics as a “significant minority”, Bishop Chartres said wryly, “Of course, we’re all minorities now.”

Their discussion ranged from the civil wars of the 16th and 17th centuries in Europe to the response of Churches to increasing secularisation and religious violence in the modern times.

Bishop Chartres joked that most people would think that an Anglican dean and a Catholic archbishop “must fight like ferrets in a sack.”

But, he added, unity would be built “as we look together at the problems facing humanity rather than looking at the differences between us.”

Saying that the service was a “celebration of a common agenda”, Bishop Chartres concluded, “Welcome home, Cardinal.”

More than 300 people attended the evening which was jointly organised by the Choral Foundation and the Genesis Foundation.

The service was mostly in Latin, with a homily by Bishop Chartres, during which he spoke of the “fragmented parts of the Church which split apart with such tumultuous consequences in the 16th century.”

Both Bishop Chartres and Cardinal Nichols praised the increased dialogue between their Churches, and stressed the need for it to continue in troubled times.

The Sixteen and Genesis Sixteen performed works by Thomas Tallis and other composers associated with Hampton Court in Tudor times.

Michele Price, Director of Development of the Choral Foundation at Hampton Court Chapel Royal said, “The music that we heard last night united us all in prayer and harmony.”

She added, “Working with the Genesis Foundation was essential in order to bring the musical and liturgical elements of Faith and the Crown together, and deepens our relationship with exciting young choral singers such as Genesis Sixteen.”

The service was hailed as “one for the history books” by John Studzinski of the Genesis Foundation.

“Dialogue between faiths is much needed and welcomed in these turbulent times. We need to recognise that we have more in common than not.”

The palace at Hampton Court was built by Cardinal Thomas Wolsey who had been presented with the site in 1514.

He and Henry VIII regularly travelled by barge upriver from London to enjoy the magnificent gardens and sumptuous accommodation.

But Wolsey fell from the King’s favour when he failed to secure an annulment from the Pope of Henry’s marriage to Catherine of Aragon.