Filipino priest slain while chatting to parishioners after Mass 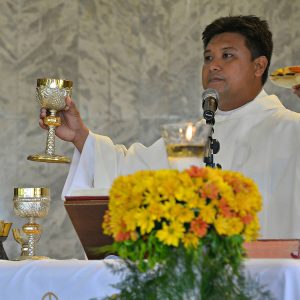 It is not known for sure why Fr Mark Ventura, aged 37, was targeted for murder, but the cleric had been a noted defender of native people’s rights in the face of exploitation by mining companies.

After celebrating early morning Mass at a gymnasium on the outskirts of the Gattaran town, at about 8.15 am Fr Ventura was blessing children and talking to choir members when a gunman wearing a motorcycle helmet appeared and shot him in the back without warning. The gunman then fled on the back of a motorbike driven by an unidentified companion.

Ordained only seven years ago and known affectionately by his parishioners as ‘Mc-Mac’, Fr Mark Ventura is the second priest to have been murdered in the Philippines in just over four months. In December 72-year-old Fr Marcelito ‘Tito’ Paez was killed by unknown motorcycle-riding gunmen. Fr Paez was also an advocate of indigenous people’s rights, but it is thought he was targeted by vigilantes because of the role he played in the release of a political prisoner last year.

“We are totally shocked and in utter disbelief to hear about the brutal killing of Fr Mark Ventura,” said Archbishop Romulo Vales of Davao, president of the Catholic Bishops’ Conference of the Philippines (CBCP). “We condemn this evil act.”

Fr Mark was a priest of the Tuguegarao Diocese. His Archbishop, Dr Sergio Utleg, visited the site of the killing this morning in Gattaran, which lies about 550 km north of Manila. The Archbishop led prayers for the repose of Fr Ventura’s soul, for his bereaved family and for the lay faithful of the parish and the wider diocese.

The CBCP has called on the Filipino civil authorities “to act swiftly in going after the perpetrators of this crime and to bring them to justice”.