Home > Featured > Filipino president calls for bishops to be killed

Filipino president calls for bishops to be killed 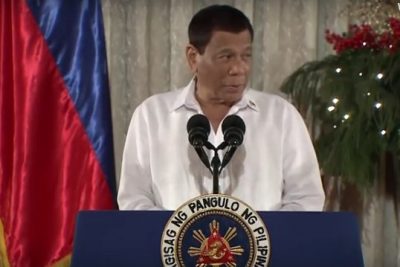 The Catholic Bishops’ Conference in the Philippines is declining to comment on remarks made by the country’s President that they were “good for nothing fools” who should be killed.

Relations between the hierarchy and President Rodrigo Duterte, who took office in 2016, have not been good for some time. The main cause of the tension is that the bishops are highly critical of the President’s war on drugs, where it appears a blind eye is being shown to a spate of extrajudicial killings.

According to government figures, some 4,500 people have been killed in the last two years, but human rights organisations put the figure above 12,000 murders.

As part of the war, martial law has been imposed on large parts of the Philippines, which has a population of 104.9 million, 85 per cent of whom are Catholic. In December last year, the CBCP said that the end of normal democratic control on army and police activity had effectively created a reign of terror.

Speaking at an event for local government officials on Wednesday, President Duterte said: “These bishops of yours – kill them. They are useless. All they do is criticise.”

After the videoed remarks were broadcast on Filipino television, the presidential office issued a statement on Thursday saying the President was speaking “in jest” and his hyperbole should not be taken seriously.

In June this year, a third Catholic priest was murdered in the Philippines in an apparently targeted attack. At the time, the Archbishop of Lingayen-Dagupan, Socrates Villegas, said verbal persecution of the Catholic Church could “unwittingly embolden more crimes against priests”.