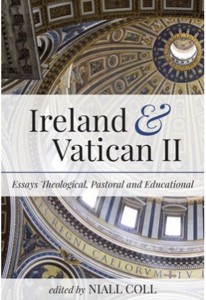 Many Irish Catholics are only beginning to awaken to the real significance of the Second Vatican Council, according to author and lecturer Fr Niall Coll.

Speaking at the launch of a book of essays on Ireland and Vatican II published on the 50th anniversary of the closing of Vatican II, he said it was important to mark the closure “because that is when its implementation begins.”

The priest of Raphoe diocese, who edited the book, said the reception of Vatican II was slow in Ireland because of the “unusually high number of religious” compared to elsewhere in the Church, “giving the impression for longer of business as usual”.

Published by Columba Press, Ireland and Vatican II is a selection of twenty-two essays divided into three sections – Retrospectives, Theological, Pastoral and Social and a final section covering Education.

At its launch on Thursday night, Irish Catholic editor Michael Kelly said it would “contribute greatly to the understanding and the ongoing relevance of Vatican II.”

“Quite often you hear people say ‘Oh in Ireland we didn’t really implement Vatican II or not enough was done.’  I think those statements are true but they can be glib. It is important to unpack what that means. A book like this is a good pause for thought to reflect after fifty years.” 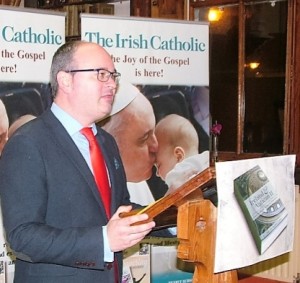 Contributors to the 330 page book range from well known Jesuits like educationalist and author Paul Andrews SJ (A Whirlwind of Change, New Life: One Jesuits Experience) and author Oliver Rafferty SJ (The Catholic Church in Ireland and Vatican II in Historical Perspective), to academics like Prof Eamonn Conway (A Guide through Today’s Educational Emergency?), Fr Eugene Duffy (Reimaging the Church in Ireland in the Light of Vatican II) Fr Paul Fleming (Mary and her Role in the Church Today), Prof Colin Harvey(Encouraging Dialogue? Human Rights and Vatican II), Sharon Haughey (Spirituality in School: Encouraging Young Faith), Fr Feidhlimidh Magennis (From Dei Verbum to Verbum Domini), Gerard McCannn (A Philosophy of Hope and Vatican II), Fr Edward McGee (Towards a Fuller Participation in the Liturgy) and Gareth Byrne (The National Directory for Catechesis in Ireland).

Two chapters come from non Catholics: Vatican II Fifty Years On: Some Anglican Reflections by Archbishop Richard Clarke, and the Influence of Vatican II on the Protestant Churches in Ireland by Patrick Mitchel.

Baroness Nuala O’Loan wrote an essay on Liberation and Authenticity, while former director of Focolare in Ireland, Juanita Majury, traced the growth of new religious movements in Ireland following Vatican II (The Second Vatican Council and the New Religious Movements in Ireland).

Other chapters came from Fiona Dineen (Catholic Education in Ireland), Fr Gerry Reynolds (Ecumenism: A personal pilgrimage), Paschal Scallon CM (A response to the violence of the modern world), Aidan Donaldson (The Preferential Option for the Poor), Irish Catholic editor, Michael Kelly (Media and Church in Ireland since the Council) and Eithne Woulfe (Religious Life in Ireland Today). 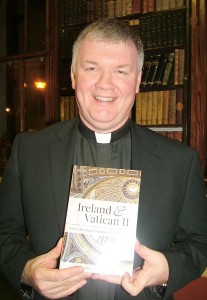 “I think it is profoundly unfortunate that the voice of the bishops is not heard in this book and I know that voice was sought,” she remarked.

She said the book was about the “journey of the Irish people from before Vatican II to the present day, the journey of faith – keeping faith, holding faith” during a time of “monumental change”.

She reminded those present of some of the markers of the pre-Vatican II era: the Mother and Baby Homes, how those born outside marriage could not become priests or religious, the weekly ritualistic confession, the prohibition of entering churches other than “our own”, the ‘Ne Temere’ decree, the conceptualisation of women as either “good mothers or Eve like sources of temptation”.

“All that was the product of a pre-Vatican II thinking.” Baroness O’Loan said the book traced the revolutionary change brought by the council and its aftermath.

“You will meet the battle between the liberation theologians and those who saw the danger of Marxism impacting on the Church as a result of Liberation Theology.”

Ireland suffered its own trauma and conflict, she said, “partly because of its failure to adequately respond to Vatican II”.

She concluded describing the book as a “seminal contribution to understanding the state of the Church in Ireland today and hope for the future.”