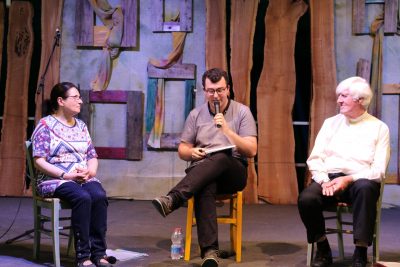 The choice to work for unity in a divided society such as that in Northern Ireland was a key topic at the European summer gathering of the Focolare movement yesterday (23 July 2019).

Around 50 Irish people are present at the European Mariapolis in the Dolomite mountains in Italy. They heard from Rev Ken Newall, a Presbyterian pastor who, with the late Fr Gerry Reynolds, was involved in setting up the Clonard Fitzroy Fellowship in Belfast. He said there are hundreds of similar groups in Northern Ireland working for peace. He spoke of his faith journey based on “choosing to live an inclusive lifestyle”.

The first step for those in the fellowship was to create a “grace space” within their own hearts and in their daily lives to include those who are “different” to them, he said.

He concluded by telling the very international audience: “Choose to live lives of inclusive love, and may you live to see in your own countries miracles of grace similar to the miracle of Belfast that I have seen. But real miracles are the strong fellowships that we build with each other as brothers and sisters of Christ.”

Some Irish participants in the audience

Another Irish speaker was Conleth Burns, who with his father, Gerry, and late mother, Mary, was involved in the setting up of a cross community centre in Armoy, Co. Armagh. He spoke about how there are two schools, sports parks, pubs, and shops in the village – one for Protestants and one for Catholics. However, the single community centre serves both communities together.

He is a young Catholic just out of college and starting work. He said that Northern Ireland remains deeply divided, and said that “21 years after our peace agreement we need to ask why another generation is growing up in a segregated society.”

He expressed concern about the current situation, saying that “Brexit introduces a new fault line of division and that it “challenges the Northern Ireland fragile peace process.”

Also on stage from Ireland was Jane Back, who is an English Catholic with parents from England and Northern Ireland and who now lives in Kildare in Ireland. The session was live streamed on YouTube to viewers across the world.

The Mariapolis event is hosted by the Tonadico community and that of the whole Primiero Valley (Dolomites, Italy) and involves more than 2650 people from all over Europe from 14 July to 11 August 2019.

Each week a new group of more than 700 arrives at the event. This week the Irish contingent is among those present. The participants are aged from 0 to 91 and come from 38 countries. Many are European, but there are also people from Jordan, Nigeria, Brazil and the Philippines. Between them, they speak 35 languages, with translations into 5 or 6 languages for most sessions.

The organisation stated that the event is taking place at a time when there is “an increasingly fragmented continent” and the Focolare movement wants to focus on the beauty of Europe in all its diversity, where the richness of every culture can emerge.

“We believe that through sharing our stories, our cultures and our histories – getting to know each other – we can lay the foundation for a more united Europe,” stated the organisers.

The first Mariapolis took place in the Primiero valley in the years of the Focolare movement following the Second World War.

This year commemorates 70 years since a special summer in 1949 when Chiara Lubich, a founder of the Focolare movement, had a profound spiritual experience that began in Tonadico. She described it later as the “Paradise of 49”. It was in that period that the first group of the movement had a full understanding of the charism of unity and of the Focolare movement that would be born from there.

All information on the event, live streaming and recordings are available on: www.europeanmariapolis.org.
and on Facebook www.facebook.com/mariapoli.europea.