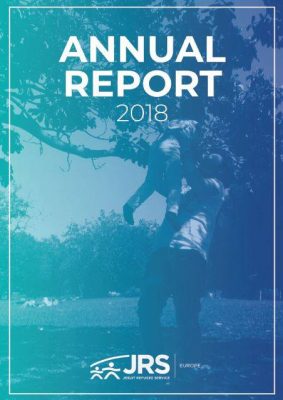 The Jesuit Refugee Service (JRS) Europe helped 60,803 people in Europe during 2018. This is according to its recently published 2018 Annual Report.

“In 2018, JRS continued to pursue work guided by its mission to accompany, serve and advocate for the rights of refugees and others who are forcibly displaced, both in the Regional Office in Brussels as well as in the 23 national JRS offices across Europe,” stated the organisation.

In the report JRS Ireland is credited with having “dramatically scaled up operations” to prevent refugee households entering homelessness or destitution when the closure of the largest Direct Provision Centre in Dublin was proposed.

In his message of introduction to the Annual Report 2018, Jose Ignacio Garcia SJ, Regional Director JRS Europe, stated that the number of people who have come to Europe seeking protection has decreased “substantially” when compared with previous years. Some 141,472 people arrived in 2018 and almost double that – 373,652  – arrived in 2016.

“Of course it is good news that fewer people are forced to seek an alternative to their lives. But the figures cannot hide the fact that behind them there are many stories of frustration and suffering. People may be reduced to numbers, but their lives cannot,” he said.

He explained that a three-year-old project that involved working with partners at the external borders of the EU concluded in 2018. It involved helping facilitate positive gatherings between forcibly displaced people and their new communities.

The project also monitored human rights violations such as border violence against migrants and push-backs at Europe’s external borders. JRS was able to propose recommendations for a more humane and protective EU approach towards migrants, asylum seekers and refugees.

“The external borders of the EU are still a grey area in terms of law enforcement and the effective protection of human rights for those who arrive,” said Jose Ignacio Garcia. He stated that despite the EU’s efforts to equip itself with different legal instruments to ensure protection for those who arrive, the reality at border posts is different.