The competition will use the 2013 Ruffati organ in the chapel of St. Patrick’s College, Maynooth for the quarter-final round, with over 2,500 pipes, fifty stops and a set of twelve bells. 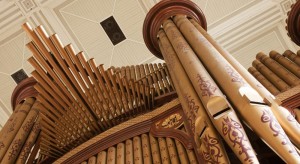 The upcoming Pipeworks Festival 2014 will take place at various venues around Ireland from June 18-27.  Formerly known as the Dublin International Organ and Choral Festival, the event was established in 1980.

The festival occurs every three years, and its aim is to bring music to Irish audiences, with particular emphasis on the organ.  This year’s festival will take place in Dublin, Maynooth, Dundalk, Armagh and Belfast.

As part of the festival, Pipeworks hosts the Pipeworks International Organ Competition 2014.  A total of 16 quarter-finalists have been selected from a record entry of 57 applicants, with Irish interest focusing on David Grealy, a native of Galway City.  The other competitors are from Lithuania, USA, Russia, Republic of Korea, France, Greece, Poland, Germany and Czechoslovakia.

The winner of the competition will receive €5,000, together with prestigious recital engagements in Ireland, the UK and continental Europe.  There is a second prize of €3,000 and a third prize of €1,500. 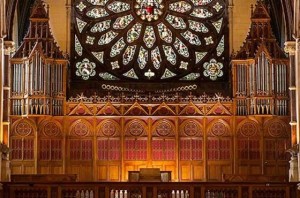 The competition will use the 2013 Ruffati organ in the chapel of St. Patrick’s College, Maynooth, for the quarter-final round.  This organ has been completely rebuilt by the “Fratelli Ruffati” organ builders from Padua, Italy.  It now consists of over 2,500 pipes, fifty stops and a set of twelve bells.

The competition will also use the 1900 Willis organ in St. Patrick’s Cathedral, Dundalk, for the semi-final round.  This organ was installed in 1900 by Henry Willis and Sons.  Its first public performance was on July 1, 1900 by Henry Lucas Balfour, then organist of the Royal Albert Hall in London.

The concerto finals will be held in the Ulster Hall with the Ulster Orchestra.  The finalists will play on the Mulholland grand organ named in honour of the former Lord Mayor of Belfast, Andrew Mulholland, who donated it to the Hall in the 1860s.  The organ was extensively restored in the late 1970s.

The Artistic Director of the Pipeworks Festival is Mark Duley, who is currently organist at St. Nicholas’ Collegiate Church Galway.  He has been busy fundraising for the event by playing 20 concerts in 20 cathedrals around Ireland.  He covered 13 counties in 7 days.  The repertoire for these concerts included music by Bach, Brahms, Mendelssohn, and Vierne.

Mr. Duley said that the principal theme of this year’s festival is “music of our own place and time”.  He added that, in the context of new works by Irish composers, the festival will afford the opportunity to “explore the organ’s unique range of colour and dynamic and its extraordinary acoustic impact”.

While the organ competition is an important part of the Pipeworks festival, there will also be the option to attend other events.  The Festival Opening Concert takes place on Wednesday, June 18 at 7pm in Christ Church Cathedral Dublin and will feature the Crash Ensemble with organist and director Pier Damiano Peretti, together with David Bremner (organ) and Susan Doyle (flute).

There will also be the opportunity to attend Mass at 6pm at the Church of Our Lady of Mount Carmel, Whitefriar Street, Dublin on Friday, June 20.  The Westminster Mass by James Macmillan will be sung by the Palestrina Choir, directed by Blanaid Murphy.

Finally, Irish organist David Adams, who won the Dublin International Organ Competition in 1986, performed in a Pipeworks-sponsored concert last Friday, May 30th at the National Concert Hall Dublin.  The programme included works by Wagner, Brahms, and Strauss in a concert that successfully demonstrated the emotive potential of the organ, together with its majesty.