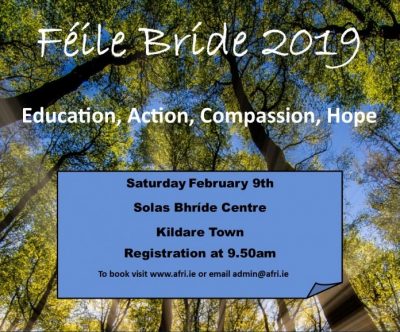 Education, Action, Compassion, Hope is the theme of the Afri conference to be held on Saturday as part of Féile Bríde 2019.

“Education, (including self-education) is an essential dimension of transformative action, and compassion in all we do has never been more necessary. Our speakers this year embody all of these vital qualities,” stated Afri, which is organising the one-day conference as part of more than a week of celebrations that started on the eve of St Brigid’s Day in Kildare.

The conference at Solas Bhríde, a centre built and run by the Brigidine nuns, is on Saturday 9 February. Speakers include Richard Moore, who organisers say offers “living example of compassion” and who the Dalai Lama calls his hero. Richard Moore will speak about ‘Educating the Heart’ in the context of his own story.

Richard Moore was blinded by a rubber bullet in Northern Ireland when he was aged ten. Many years later he met the British soldier responsible for his devastating injury and they became friends. He also set up Children in Crossfire, which aims to help all children, especially those in poverty, reach their potential.

Other speakers include Caoimhe de Barra, who was recently appointed as Trócaire CEO and has worked for the charity for 21 years pursuing justice and human rights, and Michael Doorly, who has worked with Concern and is involved in promoting global education and equity. Also in the line-up is Kay Mulhall, a Brigidine sister who set up Tallaght Intercultural Drop-In Centre, and who is described by organisers as having shown by her actions what it is to “stand in solidarity with the oppressed and seek to build a more inclusive community”, and Meghan Carmody, who works with Friends of the Earth and is one of the new generation of activists who want to see the world transformed.

“Such people and actions – as well as Laoise Kelly’s magical music – bring us hope, the vital antidote to cynicism and despair. A new year, a new spring and a renewed sense of purpose can see us decisively turn the tide in 2019,” said the organisers. 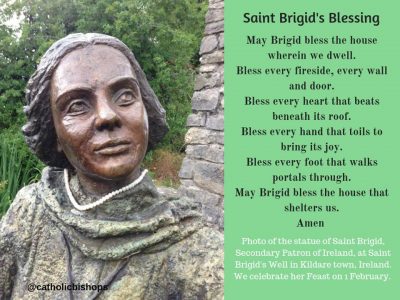 The Afri conference is part of more than a week of events that started on 31 January with the St Brigid’s Eve Ritual outdoors after dark at St Brigid’s Well and included quiet reflection, song and prayer on the eve of springtime. The facilitators were the Brigidine sisters and Solas Bhríde team who have been involved since 1993 in celebrating St Brigid, who is the patron saint of Kildare.

Luka Bloom, a well-known Kildare singer, described the event: “People also come to Kildare at this time, to speak about justice in the world, or lack of it. There is reflection, talk, music and dance. It is not a big trendy festival, but a gathering of people who want to celebrate the coming of spring, and who want to call Brigid’s qualities into the world, to light a spark for change.”

He added: “Every year we gather to welcome the light into our world; and to hope that more light will shine in the world; and that some day out of the darkness of war, hunger, greed, poverty, will come the light of community, sharing, justice, music, dance, peace and love.”

Today (Wednesday 6 February) there is a Floral Art Demonstration by Enda Thompson Phelan, AOIFA at Solas Bhríde Centre. That will be followed in the evening by the Annual Celtic Lecture, which has the theme Receptions & Transformations of St Brigid in Europe, delivered by Dr Shane Lordan at Kildare Education Centre.

Throughout Féile Bríde, Kildare Heritage Centre is also holding St Brigid’s Treasure Trail for childen (11+) to explore the sites associated with St Brigid, with maps available. Artist Josephine Hardiman is present during the week to develop further original drawings and pages for her “Book of Kildare” Exhibition. There are Monastic Walks around the sites associated with St Brigid.

Brigid was born in 454 and founded a double monastery in Kildare with the assistance of Bishop Conleth. The Saint Brigid’s Cross, in legend used by Brigid to explain the Christian faith, remains a popular sign of God’s protection.

Demonstrations and sessions of weaving the St Brigid Cross also feature during the week of events that attract local and international visitors.