Home > Featured > Famine Memorial Garden links past with the present

Famine Memorial Garden links past with the present 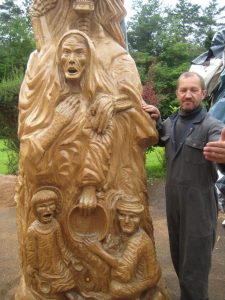 A new Famine Memorial Garden commemorating the tragic loss of life on an unprecedented scale in Ireland over a century and a half ago will be blessed and officially opened this evening in the diocese of Clogher.

The memorial garden is located adjacent to the Sacred Heart church in the parish of Devenish in Irvinestown.

It is located beside the site of an old workhouse, which played a prominent role in the locality at the time of the Famine.

The new memorial builds on the work already done by a local cross-community group in restoring a famine graveyard nearby and follows from the earlier creation in 2010 of a Garden of the Celtic Saints at Sacred Heart church.

Local man, Jonas Raiskas, who is originally from Lithuania, is responsible for much of the work done in these two projects.

He was commissioned by the parish to create 20 carvings in the Garden of the Celtic Saints plus those in the new memorial garden.

In a statement, local parish priest Canon Michael McGourty said the new memorial calls all in the community and beyond to reflect not just on our past but on our present.

“It calls us to address the poverty and famine in our own world today and constantly answer the call of the Gospel to reach out to those in need,” Canon McGourty said.

“Its location and its art does so in a way that brings both the traditional message and the history of Irish Christianity into focus in a profound way,” he said.

Today’s ceremony will be led by Bishop Liam MacDaid of Clogher who will bless the new garden before celebrating Mass at 7pm.