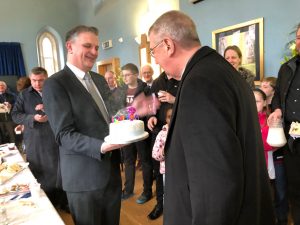 The principle challenge for Christians today is to witness to God in a secularised world that has problems even knowing where to look for God, Archbishop Diarmuid Martin said in his homily at a Mass to mark the 140th anniversary of the opening of Rathfarnham church in 1878.

He reminded the congregation, “We Christians are resurrection people called to witness to those who doubt and the many who are indifferent.”

He said the concelebrated Mass was a thanksgiving for the witness of the community in Rathfarnham over the past 140 years.

According to Moderator, Fr Martin Cosgrove, the celebration is also part of a programme of renewal of commitment to the faith within the parish.

Speaking at the end of Mass to the congregation about the World Meeting of Families, which takes place from 21-26 August, Dr Martin said it was “very important that we look at renewal of faith in terms of families”.

“We tend to sometimes isolate families as something out there; the family is something that touches every aspect of our daily lives and none of us would be here today if it wasn’t for a family.” He added that families that are broken and injured are still families where there is love.

The Archbishop said families are affected by many of the issues in society, such as homelessness and he pointed to the Capuchin Day Centre on Church Street in Dublin which now has five tables for families who are homeless so that they can sit and eat together.

“Refugees are people longing for their families,” he said and added that a prisoner longs to get out to be with his wife and children.

Parishioner, Tony Corcoran, explained to the congregation at the start of the Mass some of the symbols of the Christian faith brought to the altar to highlight the long history of Christianity in the locality, dating back to the 6th century.

A chalice from penal days in Rathfarnham was used in the Mass, while an ancient stone wheat grinder which was excavated from the penal mass house was also among the symbols brought to the altar, as was a baptismal register dating back to 1807, and a trowel used by Cardinal Cullen to lay the foundation stone for Rathfarnham church on Easter Monday 29 March 1875.

One of the students who made her confirmation this year presented a globe of the world to symbolise the many women and men who brought the faith from Rathfarnham to the four corners of the world while Henry Rogers, who donated the site for the church in the 19th century, was remembered.

Archbishop Martin explained that the crozier he was wearing was Cardinal Cullen’s and dated from 1866 and so would have been used at the ceremony of the laying of the foundation stone of the church in Rathfarnham. 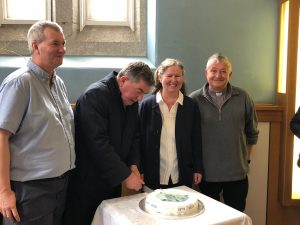 Addressing the congregation, Fr Martin Cosgrove said the anniversary was “An opportunity to renew the life of our parish in different ways” and a programme of events is planned for the year ahead.

“It is wonderful on a day like this to think of all those who have gone ahead of us, who cherished and held on to their faith. It is our responsibility to do the best that we can to pass it on to those who are coming behind us,” Fr Cosgrove said.

Among the visitors on Sunday who attended the ceremony was a representative of the Society of Friends, Rachel Bewley-Bateman.

In his address, Fr Cosgrove paid tribute to Archbishop Martin whose birthday it was.

He told the congregation, “When I think of Diarmuid Martin, I think of a leader who is inspirational. I speak for myself and indeed for many others, he has given us a type of leadership that is very relevant, down to earth, practical and one any ordinary human being can understand.”

He also thanked Dr Martin for his “inclusivity” and for the part he played in bringing the World Meeting of Families to the diocese.

Speaking to Catholicireland.net after the ceremony, Fr Cosgrove described the World Meeting of Families as “a great opportunity for the Church and indeed for the country to do a bit of renewal around family and around community.”

“I think it has to be an inclusive celebration because family was understood very simply as father, mother and children, but now we have all sorts of different groupings all struggling to be family. As I understand the gospel, Jesus Christ had plenty of space for everybody.”

“There are a number of months between now and the World Meeting of Families when Pope Francis will visit. This is a wonderful opportunity for any parish or grouping of parishes to do things together in preparation for that.”

He also stressed that while “August will come and August will go”, it is “important that we don’t forget about 1st September”.

“I am old enough to remember the visit of John Paul II – it happened a week after my ordination in 1979. It was a superb week but then suddenly nearly everybody forgot that it had happened and it became a folk memory and very little happened. We need to have ongoing continual renewal; that has to happen after August.”

“It is my privilege to serve at this time, to do what I can to encourage and build up the community and help include people in it and pass on the faith’s great gift. We have to find new ways of doing that – the old ways just don’t work anymore, they are quite meaningless for a generation of people that are coming along. So, we have to find new ways and approaches to reach people.”

During the coming year, the parish will celebrate different moments in people’s lives like marriage jubilees and there will also be a special liturgy for all those whose lives have not worked out as hoped for, be it that broken relationships or the loss of a job and other such disappointments.