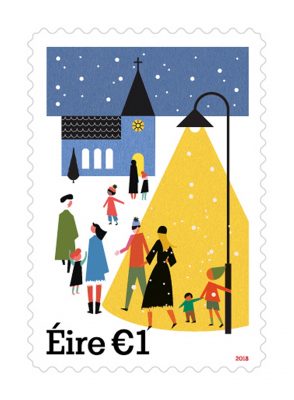 Two religious themes will feature as part of this year’s Christmas stamp collection.

For the first time ever, An Post held an online survey earlier this year, asking members of the public what they would like to see on the collection. From thousands of entries, a shortlist of the top suggestions was created and put to a vote. The six most popular themes chosen include two religious themed stamps: people making their way to Midnight Mass, and a visit to the local Crib.

“There are so many traditions – from people taking dips in the 40 foot, to running the GOAL Mile,” Aileen Mooney, An Post Irish stamps manager told CatholicIreland.net. “But the scenes that came up again and again concerned family and ways of spending time together.”

The full selection of Christmas stamps includes: A family watching The Late Late Toy Show, people making their way to Midnight Mass, meeting loved ones at the airport, a visit to the local crib, a child getting ready for Santa’s arrival on Christmas Eve, and a Christmas dinner with turkey, sprouts and all the trimmings.

The seventh stamp, which will be included in mixed booklets (at €19 per booklet including a free stamp and a €5) is an additional 50c Star of Bethlehem stamp for making up the €1.50 postage for cards going abroad.

The stamps, which were designed by Detail Design Studio, are available now in post offices.

The online survey was carried out early in 2018, with the voting happening around June. “It caused a bit of a stir because we were asking people what they wanted to be in a Christmas stamp on the middle of a heat wave!” said Ms Mooney.

She said she hoped that the new stamp designs would bring a sense of home for friends and family abroad.

“For our customers in Ireland, we want to see everyone embracing the tradition of sending Christmas cards and letters to their loved ones and using these beautifully illustrated stamps which include the nation’s favourite Christmas moments.”