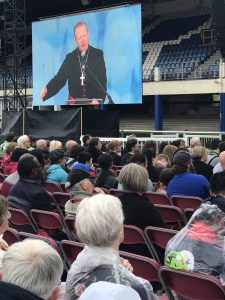 In the aftermath of child abuse scandals and other shameful episodes of the past, some people feel they can no longer trust the message of the Church, Archbishop Eamon Martin said on the first full day of WMOF 2018.

He said that this is perhaps because “they have been directly hurt and betrayed in their families by their experience of Church, or because the revelations of such heinous crimes have shocked them to the core”.

He added that in the 2010 Letter to the Catholics of Ireland, Pope Benedict XVI alerted people to the fact that the sins and crimes of sexual abuse in the Church have not only had tragic consequences in the lives of victims and their families, but they have also “obscured the light of the gospel”.

In his keynote address at the Family Arena at the WMOF 2018 Pastoral Congress in the RDS, the Archbishop added that Catholics must work together with all people of goodwill to encourage the State to support the family, “and especially the uniqueness of the faithful and exclusive union between a married man and a woman as a cherished space for the bearing and upbringing of children”.

He explained that in doing this, the State cares for its citizens, but it is also strengthening and nurturing the foundations of society itself. He quoted Pope Francis, who said: “The family deserves special attention by those responsible for the common good, because it is the basic unit of society, which brings strong links of union that underpin human coexistence and, with the generation and education of children, ensure the renewal and the future of society.”

Cardinal Luis Antonio Tagle, Archbishop of Manila, Philippines, speaking of the so-called “throwaway culture”, said that this attitude has extended from consumer goods into values and culture and even to marriage itself. He suggested that it has gone so far that people might now want to include on the marriage certificate a “use by” or “best before” date. 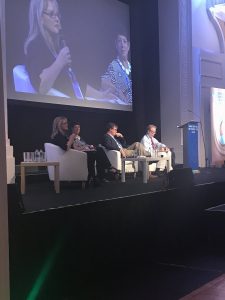 In one of the many panel discussions on topics ranging from homelessness to immigration, Dr Mary Aiken, Adjunct Ass Prof in UCD, said that the issue of child protection online is more severe than ever.

She said that children under 13 should not be given smartphones that can access Wi-Fi, as thousands of predators are given access to that child. Dr Thomas Lickona said that to protect young minds online it is importance to have “screen policies” and a family media plan.

CatholicIreland.net journalist, writer and broadcaster, Susan Gately spoke in the panel titled “Why Get Married in Church? Presenting Sacramental Marriage as a Path to Joy”. Thirty years after her marriage in the Church, Susan Gately spoke of how the joy of God’s sacramental love has accompanied herself and her husband, Aidan, throughout their marriage, especially in difficult moments.

Moderator of that panel, Fr Michael McGinnity, Family Ministry Director, Diocese of Down & Connor, Ireland (North), spoke of the importance of working with young engaged couples who approach him about getting married in the Church.

Some say they want it because of the sacrament, others because their parents did, others might like the look of the church or its location. However, he said whatever the reason, it is a starting point for setting out on a journey with the engaged couple which will help them understand that their love matters to God and to the Church. The Pastoral Congress continues in the RDS on Thursday and Friday.

As well as the WMOF 2018 Pastoral Congress, on Tuesday civil authorities and the Gardaí announced that Pope Francis will be driven through Dublin city centre in a popemobile on Saturday afternoon, giving up to 100,000 members of the public the opportunity to see the Pontiff. His route will go south on O’Connell Street, across O’Connell Bridge, up Westmoreland Street, and continue up Dame Street. It will pass Christchurch Cathedral and Bridge Street and cross the Liffey onto Church Street to the Capuchin Centre, where Pope Francis will have a private meeting with homeless families.