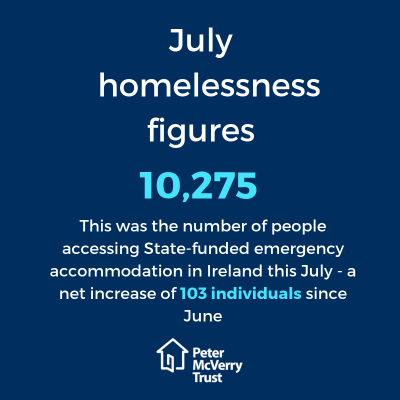 The latest government statistics show that there was an increase of more than 100 people becoming homeless during July.

“This shows there has been a failure to stem the flow of families and individuals into homelessness every month,” he added.

“We firmly believe that homelessness can be ended and are working hard to achieve this. Focus Ireland – in partnership with the State – helped 59 families to leave homelessness last month in Dublin which means that 124 children in these families now have a place to call home,” said Pat Dennigan.

However, in the very same month Focus Ireland figures show that more than double that number of families and children became homeless in Dublin.

Mr Eoghan Murphy, Minister for Housing, Planning and Local Government, said: “We continue to do everything we can to get people out of homelessness but the increase in July shows that this remains a huge challenge. There are fewer families and children in emergency accommodation today than this time last year. Of course there shouldn’t be any.”

Regional figures show that the crisis has spread to many cities nationwide, with over 500 families and 1000 children now homeless outside of Dublin.

Focus Ireland staff and volunteers put together hundreds of school packs to help the rising number of schoolchildren who are homeless as they returned to school after the holidays.

The charity called for the government to review its policies dealing with homelessness and stated that such a review must examine very carefully how children are being treated in the homeless crisis.

“We know through our work supporting families that homelessness is very damaging to children,” said Pat Dennigan.

Focus Ireland repeated its call for the government to set a cast-iron deadline that no family or individual should be homeless for longer than six months and to put a specific family homelessness strategy in place to deal more effectively with the crisis.

The charity called on the government and all TDs to ensure that they make homelessness a greater priority when they return to the Dáil in mid September.